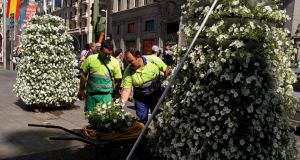 Spain’s monarchy will seek to strike a balance between pomp and austerity today, as a new king takes the throne in the first royal succession of the country’s democratic era.

Crown Prince Felipe (46) inherits the crown from his father, King Juan Carlos (76), who has abdicated. The royal household says the day’s ceremonies and celebrations will “have the solemnity and dignity required by such historic developments, along with the austerity that the current times demand.”

Spain recently emerged from its second recession in five years. However the legacy of the deep economic crisis is still highly visible, with unemployment at over 25 per cent and many families still being evicted from their homes.

In recent years, the economic plight of ordinary Spaniards has magnified the royal family’s indiscretions, such as a lavish elephant-hunting holiday by Juan Carlos in Botswana in 2012 and an ongoing probe into the allegedly corrupt business dealings of his son-in-law, Inaki Urdangarin.

The monarchy’s desire to reconnect with ordinary Spaniards helps to explain why no foreign royals or leaders will be present when Felipe VI takes his oaths of office and is proclaimed king in the national Congress building today.

Instead, senior politicians, as well as the country’s former prime ministers, will be present. While the new king’s wife, Princess Letizia, and his two daughters will accompany him, his father will stay away, on the grounds that his attendance would distract attention.

While economic considerations will rein in the pomp today, security will be tight.

About 7,000 police and civil guards have been deployed in Madrid and although there is not believed to be any specific threat, the national terror alert has been raised a notch to level three (out of four) ahead of the event.

On Tuesday, the succession cleared its final political hurdle, with the parliamentary upper house, the Senate, voting overwhelmingly to back the “abdication law” drawn up following Juan Carlos’s announcement on June 2nd. A total of 233 of 258 senators voted for the law, with some leftist and regional nationalist parties opposing or abstaining.

The abdication has sparked calls from some quarters for a referendum on the future of the monarchy and a republican group has gathered the signatures of several well-known cultural figures for a petition to this effect. Javier Bardem’s actor mother, Pilar, and novelist Almudena Grandes were among those who have signed the petition.

A recent poll by Metroscopia showed that 62 per cent of Spaniards were in favour of a referendum “at some point” while 36 per cent said they would vote for a republic.

However, the conservative government has ruled out any such initiative on the grounds that it would be unconstitutional. Instead, it has been keen to highlight the swiftness and efficiency of the succession process.

As of midnight last night, Felipe VI’s reign was technically under way. In Congress today he will make his first speech as king and he is expected to offer some clues about his approach to the role.

4 Coronavirus: Number of vaccine doses given in the State passes half a million, Taoiseach says