Signs of leeway from Europe on debt ahead of Greek election 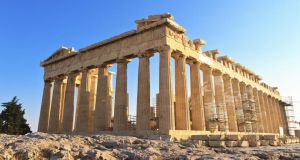 European leaders have held out the prospect of further restructuring of Greece’s debts as polls indicated that a left-wing party which wants to repudiate Greek loans will take power tomorrow.

In Athens yesterday, Syriza leader Alexis Tsipra said a government led by his party would begin talks with euro members after taking office, with a view to reaching a deal by July or August.

“The fear is finished, the fear is a thing of the past,” Mr Tsirpas said, claiming his party was only a step away from winning an overall majority.

Syriza continues to draw support from across the country’s left-right divide, with Mr Tsipras seen as representing a final chance to heave the country out of crisis by sending a signal to Europe for change.

The election is widely seen as a lightning rod for radical populism across Europe and will encourage support for such parties across the continent, particularly in countries such as Spain, which has seen significant opposition to the fiscal consolidation demanded by the European Union.

Greece’s bailout is due to expire next month, following the Eurogroup’s decision in December to extend the EU portion of the bailout by two months.

Yesterday the Dutch head of the Eurogroup, Jeroen Dijsselbloem, said there was “room to manoeuvre” with Greece over its adjustment programme, but not if a new left-wing government fails to honour existing agreements with the EU-IMF.

His comments echoed those made by Finnish prime minister Alexander Stubb. He told the Davos forum on Thursday that it would be possible to look at a further rescheduling of Greece’s debts if they stayed in an agreed programme.

The Taoiseach, who was sharing a platform with Mr Stubb at the World Economic Forum, said he agreed with his Finnish counterpart’s assessment.

Speaking yesterday before he left Davos, Mr Kenny said: “What happens in Greece is a matter for the Greek people but speaking to Greek politicians, they understand that when you sign on for a debt write-down in terms of the bailout and the advantages they have got, there are conditions that have to be applied there.

“I would hope that Greece and the citizens of Greece will continue within the euro zone. For countries in programmes who have that opportunity there are conditions and regulations attached to it.”

“We have shown that we did whatever could be done to support Greece,” he told an audience at Davos. He also warned that Greece would not be able to participate in the massive monetary stimulus package announced by the ECB on Thursday if it was not in an agreed support programme,

Mr Dijsselbloem pointed out that keeping Greece on a credit drip forever was not acceptable. “We have to reach a point where the Greek economy can finance itself, and that is not easy at present,” he said.

1 Midlands lockdown: ‘Why shut down Offaly and leave Dublin open?’
2 Restrictions on Kildare, Laois and Offaly could be extended to other counties, NPHET warns
3 Sand-hued cyclepaths changing the face of south Dublin coast
4 Meat plant clusters may be down to softly-softly approach
5 Inside the dog-trafficking trade: ‘After drugs, it’s guns, then pups’
Real news has value SUBSCRIBE