With two double agents uncovered in the last week, Germans are wondering how many of the 4,000 foreign intelligence agency employees have more than one paymaster 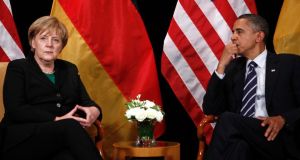 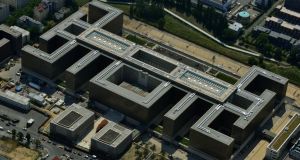 The new BND headquarters: spread over a site the size of 35 football pitches and 5,200 rooms, the first employees moved in last March 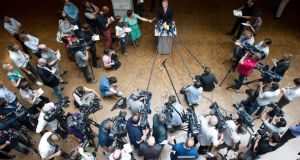 Control: Clemens Binninger, chairman of the German parliamentary committee that controls intelligence services, makes a statement about the developments in the spying scandal concerning the US. Photograph: Daniel Naupold/EPA

In the Cold War era, the spy game in Berlin played out around Checkpoint Charlie, the Friedrichstrasse border crossing favoured by army officers, diplomats and spies posing as both.

A quarter century after the Cold War ended, Berlin has a new centre of spycraft: the new headquarters for the Bundesnachrichtendienst or BND, Germany’s foreign intelligence agency.

Spread over a site the size of 35 football pitches and 5,200 rooms, the first employees moved in last March. But, with two German double agents uncovered in the last week, people are wondering how many of the 4,000 BND employees set to move in here by 2016 will have more than one paymaster.

On Wednesday of last week, a 31- year-old BND man was arrested and admitted contacting US intelligence and selling on 218 files for €25,000. Last Wednesday, the defence ministry confirmed that an employee in its international section had been questioned and his home searched on suspicion of double agent activity.

A day later, a small group of diners sit on the street opposite the BND complex, watch builders lower a section of an elongated fence into place and joke about whether it’s to keep foreign agents out – or in.

“In Germany, we believe our intelligence agencies’ main competence is incompetence,” said Kurt, a cheery designer who lives above the cafe. “They have thousands of staff and an annual budget of €500 million, but the CIA has 20 times that.”

It’s a truism of the intelligence trade that successes remain secret while failures often go public. Unfortunately for Germany’s intelligence services – the BND and its domestic counterpart, the Bundesamt für Verfassungsschutz (BfV) – the last years have seen a series of remarkable, public failures. They overlooked the Hamburg terrorist cell plotting the September 11 attacks as well an underground neo-Nazi group behind a decade-long killing spree of Turkish immigrants. Last October, intelligence officers reportedly learned the NSA was spying on Chancellor Angela Merkel’s mobile phone only after Der Spiegel magazine told them.

The US has been spying here since before either the CIA or the current German state existed. At this stage, the only certain outcome of the current spy affair is that this practice will not change. German expressions of surprise and annoyance, Washington concludes, are a face-saving exercise.

Starting with a secret contractual agreement of 1955, the US and German agencies have continually updated their co-operation treaties in the subsequent decades. Asked about the relationship between US and German services in 1963, chancellor Konrad Adenauer’s chief of staff Hans Globke said the co-operation had effectively created a “unified organism”. Little has changed today.

While German politicians condemn US blanket surveillance revealed in the leaks of Edward Snowden, the same files suggest the NSA has trained German agents in using its XKeyscore internet surveillance software – and that the Germans are among its most assiduous users.

A recent agreement from 2009 obliges the BND to pass on swathes of information to US intelligence automatically – including the personnel information reportedly leaked by the BND double agent caught last week.

Tensions arise when the Germans uncover CIA covert operations and reach breaking point when, as now, these operations leak. The problem isn’t so much spying as getting caught.

In 1996, German intelligence expelled a CIA agent after he was found trying to obtain confidential information about German trade with Iran’s nuclear industry. Three years later, the CIA withdrew three agents in Munich caught trying to recruit German officials, but foreign ministry attempts to have the CIA station chief in Berlin expelled were overruled.

Asking the current CIA station chief to leave this week, German intelligence analysts suggest, is a way of releasing political pressure. In the year since the first Snowden leaks appeared, Germans demands for clarification from Washington, and requests for closer intelligence co-operation with the US, have gone unanswered.

For their own credibility, these latest revelations have obliged German leaders to also go public, wearing aggrieved expressions and making sombre warnings.

For Prof Josef Foschepoth, a historian of US-German intelligence ties, German politicians’ key message is not their expressions of annoyance but their insistence that their co-operation with the US continue.

“The outrage is a laughable but skilful bit of theatre for a domestic audience,” he said. “The Germans see themselves as the star pupils of US intelligence co-operation and the emotional annoyance you see now is the expression of injured self-esteem.”

Senior German politicians lined up this week to condemn US “spying on friends”. Finance minister Wolfgang Schäuble, a two-time interior minister, said that recruiting “third-rate” German agents was “so stupid it’s enough to make you weep” because the huge political fallout was disproportionate to the meagre intelligence gain.

But Clemens Binninger, head of the Bundestag intelligence committee, conceded yesterday it would be “unrealistic to promise our population we can definitively prevent foreign intelligence services operating here”.

Off the record, senior German figures admit that they have little option but to turn the other cheek to Washington.

“I am not shocked because I expect nothing less from the US than what they’re doing,” said a senior figure in the Social Democratic Party, Chancellor Merkel’s coalition partner. “The problem is that our services are good on the ground but, in intelligence gathering and processing, we are hugely dependent on the US.”

As Berlin works to wind down the scandal, officials here are hopeful they can agree new rules of engagement with Washington to limit mutual spying. To reduce Berlin’s dependency on the US, meanwhile, German interior minister Thomas de Maizière is likely to demand additional funding for Germany’s intelligence agencies.

At the cafe opposite the BND’s new headquarters in Berlin, lunchtime diners are doubtful that more money will buy more competence. Reports that a 31-year-old man copied and sold classified information under his BND bosses noses – despite being visually and physically impaired – does not, they say, inspire confidence.