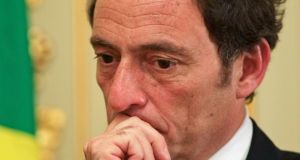 Portugal’s coalition government was thrown into turmoil yesterday after foreign minister Paulo Portas resigned due to a disagreement with the prime minister over how to manage the country’s struggling economy.

Mr Portas announced he was stepping down due to prime minister Pedro Passos Coelho’s choice of finance minister to replace the outgoing Vítor Gaspar, who resigned on Monday.

Mr Passos Coelho refused to accept Mr Portas’s resignation in an effort to avert a “political, economic and social collapse” and keep the country’s bailout programme on track.

Mr Gaspar had cited “significant erosion” of public support for the austerity policies he was implementing as a reason for his sudden departure, which in itself caused shockwaves.

His replacement was named as Maria Luís Albuquerque, previously secretary of state for the treasury, who is expected to maintain her predecessor’s tight spending stance.

But in a resignation statement issued yesterday just half an hour before Ms Albuquerque was due to take office, Mr Portas said her appointment was a missed opportunity to “open a new political and economic cycle”.

“The prime minister’s choice needed to be particularly careful and consensual,” the communique read. “I expressed in a timely fashion this point of view to the prime minister, who, nonetheless, confirmed his choice [of Ms Albuquerque]. In the light of this, and taking into account the decisive importance of the finance ministry, it would be dishonest of me to remain in the government.”

Faultline exposed
Mr Portas’s resignation opened up a major faultline in the governing coalition. He is the leader of the centre-right People’s Party, the junior partner in the administration, and without its support Mr Passos Coelho’s Social Democratic Party cannot get legislation through parliament. Two other ministers from the People’s Party were left in the cabinet following Mr Portas’s announcement yesterday.

Mr Passos Coelho took power in 2011 shortly after the country had requested a €78 billion euro bailout loan from the EU. With Mr Gaspar’s support he slashed public spending and raised taxes as he sought to keep the rescue programme on track.

The troika recently agreed to extend the terms of the bailout by seven years and it loosened the public deficit target for this year to 5.5 percent of GDP from 4.5 percent previously.

But as the country’s recession stretches to three straight years and the jobless rate has climbed to nearly 18 per cent, the clamour for less austerity and more growth has been building – among unions, businesses, social organisations and even members of the government, with Mr Portas repeatedly speaking out on the issue.

The Passos Coelho administration has also faced legal challenges to its policies. In April, the constitutional court struck down four cost-cutting measures introduced by the administration, creating a new €1.3 billion hole in the public accounts.

In his own resignation letter on Monday, Mr Gaspar had hinted at the tensions in the coalition over economic policy. He also revealed that he had offered to resign in October 2012 and acknowledged that “repeatedly falling short of [economic] targets undermined my credibility as minister of finance”.

On hearing the news, German finance minister Wolfgang Schaüble expressed admiration for his departing Portuguese counterpart. “I will miss someone I trusted, someone who bravely fought for his country’s wellbeing,” he said.