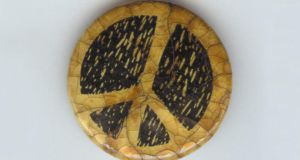 Some 3,000 back-to-school diaries destroyed after parents complained about the symbol on the cover.

A group of secondary schools in the ultra-conservative Dutch Bible Belt has destroyed 3,000 back-to-school diaries specially printed for teenage pupils, because parents complained that the internationally recognised peace logo on the cover may have “Satanic” origins.

The cover features six students wearing T-shirts, one with the circular logo designed in 1958 by artist Gerald Holtom for the philosopher Bertrand Russell and his Campaign for Nuclear Disarmament.

The Pieter Zandt Schools Organisation, which runs the orthodox Protestant secondary schools in the towns of Kampen, Staphorst and Urk, confirmed the diaries had been recalled and destroyed after complaints from parents about the symbol’s “occult links”.

“The parents’ conviction that the symbol was unacceptable was so strong that I knew a rigorous approach was the only solution,” said the schools group chief executive, Johan van Puten, who added that the diaries would cost at least €15,000 to replace.

Some parents even warned that the logo was “one of the signs of the anti-Christ”.

Mr Van Puten said that having listened to the parents, he had “googled” the logo and found it was indeed similar to the “Nero Cross”, named after the Roman emperor who is reputed to have had the Apostle Peter crucified, head downwards – hence the design.

Mystical powers had also been attributed to the symbol by the 19th-century American writer and Freemason Albert Pike in his book Morals and Dogma of the Ancient and Accepted Scottish Rite of Freemasonry, reprinted in 2002.

Having found that the Nero Cross had apparently been associated since Roman times with the “persecution, torture and killing of Christians”, and more recently with occultism, Mr Van Puten said he had concluded that there might be a basis to the complaints. Although he realised that “wasting paper is a poor example to our pupils, and for that reason it hurts me”, destroying the diaries was “the lesser of two evils”, he wrote in a letter circulated to parents.

The diary cover, said Mr Van Puten, has been designed by some of the schools’ students – and he was confident the logo had been used innocently, in line with its peaceful meaning.