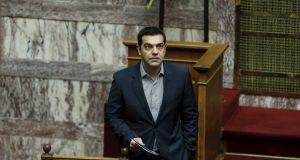 There is something disturbing about a road sign near my house reading “To the beach” when the road leads uphill. But the sea (thalassa) has always been a cardinal point of reference for the Greeks: a trade route, a highway, a source of sustenance and a potentially lethal medium.

Another word current in Greece today is afigima, meaning “narrative”. Greeks crave a narrative that is credible and offers a route-map to tranquillity, an end to austerity. If prime minister Alexis Tsipras can provide that and bring the country to the life-giving sea, he will remain popular and in power. But the road to the sea for the Syriza government is uphill all the way, and finding a viable narrative makes it all harder.

Persuading Greece’s creditors that the reforms they insist on can be implemented is a major administrative hassle because it demands political will and bureaucratic compliance. Creditors – especially Germany – have long doubted the capacity of any Greek government to achieve these reforms, thus endangering the payment of bailout funds.

Which is why the Savvaidou affair has made the gradient so much steeper for Tsipras.

Katerina Savvaidou was, until October 22nd, head of Greece’s tax collection agency, a body ostensibly independent of government, responsible for reforming the system of tax collection, which is one of the greatest obstacles to drawing the rich into the tax net from which they have traditionally been excluded through their political influence.

A Harvard-educated lawyer, she joined the public service from the world of academia. Her two immediate predecessors, also professors, resigned due to political interference with their pursuit of tax evaders. Savvaidou wasn’t so lucky. She was sacked.

A unanimous vote of the cabinet decided she had allegedly delayed the introduction of a particular tax measure in order to favour those who would be affected by it. She has denied this wrongdoing, for which a prosecution was in train at the time of her dismissal. The fact that the matter was sub judice only exacerbates the confusion over the decision.

Her dismissal has greatly compromised the credibility of Syriza since in the public eye it has branded them as no better than their predecessors where political interference is concerned.

The troika creditors saw Savvaidou’s dismissal as a step back from the seaside. With the previous resignations, her exit would signal that the tax reforms and catch-up on debt collection were as elusive as they had ever been: the super-rich would go super-free, and Greece’s tax targets would not be met – a fact about which the troika had been convinced for several months due to an intransigent, slothful bureaucracy dominated by political interference and corruption.

This is not the first embarrassment for Mr Teflon: just before the September election, Alekos Flambouraris, minister for co-ordination and deputy prime minister and the man to whom Tsipras refers as his “political father”, was accused of concealing his interest in a company which gained a government contract worth €3.9 million.

Meanwhile, in the days before Savvaidou’s sacking, Giorgos Stathakis, minister for economy, development and tourism, admitted his declaration of interests had omitted assets worth €1 million – an oversight he attributed to his having made a declaration that was “premature and possibly incomplete”.

These are three instances of potential disaster for a party and prime minister whose electoral strategies have been based on setting an ethical distance from the practices of former governments.

As Kathimerini editorialised on the day following Savvaidou’s dismissal, “a state manned by party acolytes will never be a fair and effective mechanism”, while on October 28th, the 75th anniversary of Greece entering the second World War, veteran journalist Nikos Konstandaras said Tsipras’s government “like all previous ones is ruled by ignorance and arrogance”.

The narratives are being rewritten and not in Syriza’s favour. The path of true politics never ran smooth. Nor does the road to the sea. Richard Pine’s book Greece Through Irish Eyes is published by Liffey Press