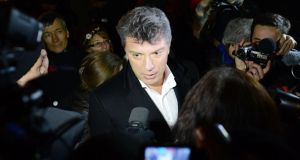 Former first deputy prime minister Boris Nemtsov speaking to the media during a rally in 2012 in central Moscow. Boris Nemtsov was shot dead in the capital on Friday. Photograph: Getty Images

Boris Nemtsov, a Russian opposition politician and former deputy prime minister, was shot dead from a passing car as he walked on a bridge just outside the Kremlin, the interior ministry has said.

Mr Nemtsov (55), an outspoken critic of President Vladimir Putin, had been due to take part on Sunday in the first big opposition protest in months in the Russian capital. He was shot four times late on Friday night in the centre of Moscow. Police cars blocked the street where he was shot. An ambulance was also nearby. “Nemtsov BE died at 23.40 hours as a result of four shots in the back,” an interior ministry spokeswoman said.

President Putin has condemned the killing and said Mr Nemtsov’s death looked like a contract killing and could be a “provocation, a Kremlin spokesman said.

Mr Nemtsov had been getting death threats and was working on a report about President Putin and Russia’s involvement with Ukraine, said Ilya Yashin, an opposition leader.