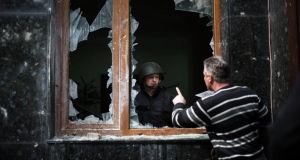 A pro-Russia activist is seen occupies the prosecutor’s building after a pro Russia demonstration during International Worker’s Day in Donestsk, Ukraine.

Russia has warned Kiev of “catastrophic consequences” if it cracks down on pro-Moscow rebels continuing to seize official buildings in eastern regions.

The crisis continues to deepen a rift between Moscow and the West, with Nato’s deputy secretary general Alexander Vershbow saying last night “the Russians have declared Nato as an adversary, so we have to begin to view Russia . . . as more of an adversary than a partner”.

Earlier, Russia’s foreign ministry expressed “extreme concern” at reports that Kiev intended to launch a security operation in eastern areas, where protesters including gunmen have seized administrative buildings in about a dozen locations.

“Such irresponsible and aggressive actions . . . could lead to catastrophic consequences,” the ministry warned, and urged Kiev and its western allies “not to make criminal mistakes” by “using force against the Ukrainian people”.

Berlin intercession
During a telephone conversation with German chancellor Angela Merkel, Russian president Vladimir Putin reiterated that message, while she urged him to use his influence to free German military monitors held by rebels in the town of Slovyansk.

Mr Putin “stressed that now, the most important thing is to withdraw military units from southeastern regions, halt violence and immediately launch a broad national dialogue within the framework of constitutional reform, involving all regions and political forces”.

Kiev says it is willing to devolve some powers to mostly Russian-speaking regions, but accuses Moscow of destabilising the country and seeking to make it ungovernable for its new pro-EU leaders.

Mr Putin claims Russian speakers are in danger in eastern Ukraine, and has threatened to invade to protect them. That was his stated reason for annexing Crimea in March, a move which plunged East-West relations to a post-cold war nadir.

Ukraine’s declared “anti-terrorist operation” against militants has done nothing to stop their almost daily occupation of official buildings, and yesterday protesters stormed the prosecutors’ office in the major city of Donetsk.

The Kremlin insists the demonstrators are just angry locals, but Ukraine, the EU and US are adamant that Moscow is whipping up anti-Kiev sentiment and orchestrating attacks on state buildings.

Military attaché
Ukraine’s SBU security service announced yesterday that a Russian military attaché had been caught receiving classified documents from a military officer he had recruited.

“With the aim of receiving essential intelligence information about the state of military-political co-operation between Ukraine and Nato countries, the foreign military spy recruited a colonel . . . who had direct access to such material,” the SBU said.

The security agency also revealed that it had caught alleged leaders of anti-government unrest in the eastern Kharkiv region, whom it accused of “planning to cause explosions on May 9th during major events for Victory Day”.

Officials claim Russia intends to further destabilise eastern areas ahead of the Victory Day holiday, and rebel referendums planned for May 11th on whether Donetsk and Luhansk regions should declare independence.

Ukraine’s president Oleksandr Turchinov has admitted that large parts of the police force in eastern regions are unwilling or unable to oppose the militants, and grave doubts also hang over the ability and motivation of the armed forces.

His office announced yesterday that he had reintroduced conscription for men aged 18-25, in light of threats to Ukraine’s territorial integrity.