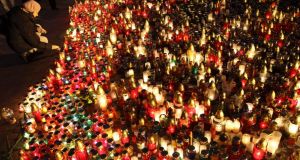 A woman in Lviv lights a candle to pay her respects to people killed in the anti- Yanukovich protests. A warrant has been issued for the arrest of the former president. Photograph: Marian Striltsiv/Reuters


Russia has denounced Ukraine’s new western-backed authorities, stoking fears of a dangerous tug-of-war over a turbulent country teetering on the brink of economic collapse.

Moscow launched its scathing attack on the people now running most of Ukraine, as they sought to stitch together a new government and financial plan, calm rising alarm among the country’s Russian-speaking citizens, and track down fugitive former president Viktor Yanukovich.

He was placed on the wanted list yesterday for the “mass murder” of scores of protesters in Kiev last week, in fierce street battles that ultimately prompted him to flee the presidency and go on the run. He was last seen in Ukraine’s pro-Russian Crimean peninsula late on Sunday night.

As the European Union and United States reiterated their readiness to provide strong political and economic support for Ukraine, Russia revealed the depth of its anger over the likely westward turn of a country that the Kremlin sees as a key ally and buffer to EU and Nato expansion.

‘Armed rebellion’
“We do not understand what is going on there. There is a real threat to our interests and to the lives and health of our citizens,” said Russian prime minister Dmitry Medvedev.

“There are big doubts over the legitimacy of a whole series of organs of power now functioning there,” he added. “Some of our foreign partners think differently, they believe they are legitimate . . . But it seems to me an aberration to call legitimate what is essentially the result of an armed rebellion.”

Mr Medvedev also made clear Moscow’s reluctance to work with Kiev’s new authorities. “If you consider a government to be people in masks roaming around Kiev with Kalashnikov rifles, then it would be difficult to work with such a government,” he said.

Mr Medvedev’s claim that Russian citizens are in danger will raise particular alarm among Ukraine’s new leaders and western states.

Moscow insists it went to war with Georgia in 2008 only to protect the safety of Russian passport-holders there. Russia now has thousands of troops in two Georgian regions that it recognises as independent states, hampering Tbilisi’s push for greater integration with Nato.

Russia’s foreign ministry described last week’s events in Kiev as “armed clashes between militant thugs, fighters from ultra-right nationalist organisations, and law-enforcement units defending the safety of the peaceful population and the interests of the state.”

Accusing western states of backing illegitimate authorities that do not control Russian- speaking eastern and southern Ukraine, the ministry said a “course has been set to use dictatorial and sometimes terrorist methods to suppress dissenters in various regions.”

National politics
It expressed alarm at “calls to almost entirely ban the Russian language”, after parliament repealed a 2012 law to raise the status of Russian in areas where it is widely spoken.

There is growing concern that Kiev’s new authorities could be radicalised by far-right elements in the protest movement which previously had little or no influence on national politics.

Western diplomats are urging members of Ukraine’s nascent government to be conciliatory towards parts of the country that are sceptical or hostile towards the uprising. The fiercest opposition to the revolution is in Crimea, which is home to Moscow’s Black Sea fleet.

The EU, US and IMF intend to provide emergency financial aid to Ukraine. Mr Yanukovich agreed a $15 billion (€10.9 billion) loan and a major cut in gas prices with Russia in December, but both are now in doubt, amid fears that Moscow will take a tough line with Kiev.

‘Coffers empty’
“The coffers are empty. We don’t have enough money to pay our debts,” said interim president Oleksandr Turchinov, having described his country of 46 million people as “heading into the abyss . . . in a pre-default state.”

Mr Turchinov said Ukraine needed $35 billion to see it through the next two years, and plans are emerging for an international conference to help the country avoid a chaotic default. Officials hope Russia – which has major investments in Ukraine – will take part.

The EU said it hoped to revive a historic trade and political pact with Ukraine, but only after presidential elections set for May 25th. Mr Yanukovich’s abrupt rejection of that deal in November triggered the first protests of the revolution.

Much of Kiev was functioning normally again yesterday, but Independence Square was full of candles and flowers for those killed last week. People’s thoughts were with them, and on the whereabouts of Mr Yanukovich and his cronies.

“The rats have deserted the ship,” said Mihaylo, a pensioner from Kiev. “If the rats give up we will put them in a cage. If not, we will destroy them.”