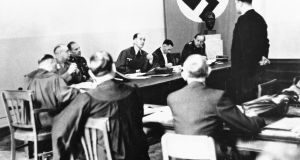 The notorious Volksgericht or People’s Court. It was 1998 before a united Germany got around to overturning the court’s verdicts. photograph: Ullstein Bild/Getty

With its neo-romanesque turrets, Bonn’s Rosenburg (Rose Castle) was not just the striking home of West Germany’s federal justice ministry. It also housed the highest concentration of ex-Nazis anywhere in the West German republic.

That is the bottom line of a study presented yesterday in Berlin, showing for the first time the staggering level of Nazi saturation among West German judges, state prosecutors and justice ministry officials.

In the postwar years, the study makes clear, the people charged with drafting a legal framework for a new, democratic German state simply carried on where they left off under Adolf Hitler.

Of 170 jurists employed in the Rosenburg, 90 had been Nazi party members while 34 were in the Nazi SA stormtrooper division. In the criminal justice department, 77 per cent of all department heads had a Third Reich career behind them. For German federal justice minister Heiko Maas, the number of Nazis uncovered in the report exceeded even his worst expectations.

“These numbers make clear why the criminal prosecution of Nazi crimes was thwarted for so long, the pain of victims ignored for too long and many victim groups – such as homosexuals or Sinti and Roma – were discriminated once again in the [West German] federal republic,” said Maas, presenting the study in Berlin.

After previous piecemeal efforts to examine its past, the federal justice ministry threw open its complete archive to a team of German historians. The fruit of their four-year labours explains how the ministry’s former Nazis worked to a principle known colloquially as “crow justice”: you don’t pick out my eyes, and I won’t pick out yours.

This latest analysis follows similar studies in Germany’s foreign and interior ministries and confirms once more the truth behind East Germany’s stinging criticism of the rival West German state: beneath the respectable political surface, ex-Nazis were pulling the strings in Bonn.

West Germany’s first chancellor, Konrad Adenauer, justified his decision to allow ex-Nazis into government – including into his inner circle – by arguing that experienced hands were needed to rebuild the devastated state.

The knock-on effect, the authors concede, was: “It was not to be expected that there would be any interest in examining the atrocities of individuals.”

Quite the opposite: the inhabitants of the Rosenburg worked tirelessly to ensure justice was denied, pushing through a 1958 amnesty for almost all Nazi war criminals and a statute of limitations on Nazi crimes that expired in May 1960.

In the subsequent decades, with few exceptions, a legal deep freeze set in. It was 1998 before the united Germany got around to overturning all verdicts of the notorious Volksgericht or People’s Court, that sent scores of people to their deaths. Another decade passed before Nazi-era treason verdicts were thrown out in 2009.

He participated in implementing the findings of the 1942 Wannsee conference, which planned the Holocaust. After the war, Massfeller worked in the federal justice ministry until 1960 as head of the family law department.

Beyond the justice ministry itself, the study offers countless, disheartening examples of bureaucratic obfuscation and legal acrobatics. Like Dr Otto Thorbeck, a judge in an SS court who sentenced to death several men linked to the 1944 plot against Hitler, including the Lutheran pastor and theologian Dietrich Bonhoeffer.

In 1955 Thorbeck was found guilty of complicity in murder but was released after an appeal the following year. In its verdict, the court said the judge “could not be condemned . . . in light of his subservience to the laws of the time”.

Seven decades after the end of the Third Reich, the damning verdict of the Rosenburg File authors: “With the exception of the Nuremberg Trials under Allied command, post-war German justice excused itself almost completely from prosecuting itself.”