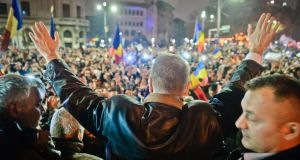 Klaus Iohannis, leader of Romania’s center-right Liberals and mayor of Sibiu: his enduring popularity and apparent incorruptibility has made him a figure of some curiosity. Photograph: Raed Krishan/AP

If, 25 years ago, Romanians believed Nicolae Ceausescu’s tyranny would be replaced by a fair and flourishing market democracy, experience soon taught them otherwise.

Post-communist Romania has been blighted by rampant corruption, the mass emigration of many of its most talented people, and poverty that EU membership has not eradicated.

Romanians have no illusions about the way their country or the EU is run, and they suspect the motives of anyone who wields political or economic power, but a nation that can appear terminally jaded has just dealt cynicism a stunning blow.

On Sunday, Romanians elected a president from an ethnic and religious minority, whom polls suggested had almost no chance of beating an incumbent prime minister whose political machine seemed to be pulling all the levers of power.

In the first round of voting a fortnight earlier, Klaus Iohannis trailed premier Victor Ponta by 10 per cent, and in the run-off the career politician from the ruling party seemed set to sweep aside the former physics teacher and provincial mayor.

Iohannis (55) is an evangelical Lutheran from the German community that first settled in Transylvania in the 12th century, and whose numbers have plummeted from around 750,000 before the second World War to a mere 40,000 or so today.

He became mayor of his hometown of Sibiu in 2000, and was re-elected several times with huge majorities.

In a country where political stars can burn brightly and then vanish, often leaving an acrid trail of graft allegations in their wake, Iohannis’ longevity, enduring popularity and apparent incorruptibility made him a figure of some curiosity.

Visitors to Sibiu, at the foot of the Carpathian mountains, found a dynamic, well-run city of 150,000, with a beautifully restored medieval heart, a large number of foreign investors, very low unemployment and a busy cultural and tourist scene.

Sibiu’s crowning moment under Iohannis – until Sunday, perhaps – was its year as a European capital of culture in 2007, which left many Romanians wondering why their local and national leaders could not be more like the man many of them called, simply, “The German”.

In a Romanian political and media world that is often shrill, vulgar and aggressive, Iohannis was distinguished by a calm, soft-spoken manner that only added to the sense that he hailed from another country or, at least, culture.

For many Romanians, he embodies the imagined qualities of Germany – and, to some extent, Transylvania, which is historically and culturally tied to central Europe, while southern Romania feels closer to the Balkans and Turkey.

While the energetic Ponta, who drives rally cars in his spare time, is seen as a slick political operator in the Bucharest style, Iohannis comes clean to his new job in the capital, save for that air of perceived German honesty and efficiency, and a letter from chancellor Angela Merkel in which she wished him luck for the election.

This sense that Iohannis could help cleanse and renew Romanian politics attracted many voters, as did fury over how Ponta’s government and party apparatus were seen to have handled the first round of the election.

Thousands of Romanians living abroad are thought to have been denied the right to cast their ballot due to a cripplingly slow and bureaucratic voting process at embassies and consulates around Europe.

Results from the first round showed that 46 per cent of Romanians voting abroad backed Iohannis, while only 16 per cent supported Ponta.

The issue triggered large protests in several Romanian cities before the run-off, and there were scuffles with police at some embassies on Sunday as long queues developed.

The sense of injustice felt by those Romanians abroad was expressed by friends and relatives at home, who voted against the man they saw as representing a system that so many see as dirty and unfair.

The outcome was indisputable: having been 10 percentage points behind his rival after round one, Iohannis won by about the same margin when it mattered most.

Thousands massed in central Bucharest to celebrate his victory; some chanted “Danke schön”, while others demanded that Ponta resign, and many waved Romanian flags with a hole in the middle – as they did in 1989, having ripped out the communist emblem.

To the surprise of an increasingly insecure, insular and cynical Europe, Romanians were back on their feet, cheering.