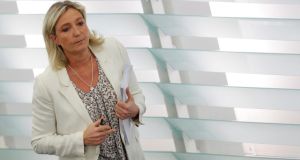 Marine Le Pen, president of France? It may sound far-fetched, but a victory by the leader of the extreme right-wing National Front (FN) is a frequent subject of speculation in Paris.

President François Hollande’s 24 per cent approval rating is the lowest measured for a French president since the Ipsos barometre was created in 1996. If the socialist Hollande faced Le Pen in the 2017 runoff, some conservatives predict the right would vote massively for Le Pen.

And if Hollande were eliminated in the first round, pitting the former president Nicolas Sarkozy – the favoured candidate of UMP supporters – against Le Pen, the “republican front,” whereby establishment parties formed an alliance against FN candidates, is no longer likely to function.

The conservative UMP dropped the “republican front” when Sarkozy, who was still president, declined to instruct voters in the event of a run-off between the FN and socialists (PS). Socialist leaders pay lip service to the moribund “republican front”, but voters don’t always listen. When the FN won a cantonal byelection with 54 per cent of the vote in the southern town of Brignoles last Sunday, Le Pen crowed that “the republican front is dead.”

Disappointed socialist voters are providing a new reservoir for the FN. Last May, 3 per cent of those who voted for Hollande in the first round in 2012 said they would vote FN in next May’s European elections. That rose to 11 per cent in a recent opinion poll by the Nouvel Observateur.

A succession of inept UMP and PS governments have convinced French voters that the “parties of government” are all the same. The belief is encouraged by Le Pen, who rails against “the system” and constantly lumps abbreviations into “UMPS”.

Disillusioned voters
Her father wanted to be the nationalist wing of the establishment right, Le Pen says. “He knocked on the door and they slammed it on his fingers.” She says she’s neither left nor right, which appeals to voters who are disillusioned with both. Le Pen has not been able to shake the “extreme right” label, but it no longer scares voters.

In the Nouvel Observateur’s poll, 24 per cent of respondents said they would vote for the FN in next May’s European elections; 22 per cent for the UMP; 19 per cent for the PS. Le Pen could well break the psychological barrier of 20 per cent in the first round of the next presidential election.

When Jean-Marie Le Pen lost to Jacques Chirac in the 2002 run-off, commentators said the FN had peaked at 18 per cent of the vote. Le Pen père fell back to 10.44 per cent in the 2007 election. Political scientists were not sure whether to credit low unemployment then, or Sarkozy’s hard line on crime and immigration.

The FN roared back in last year’s presidential election, when Marine Le Pen won 17.9 per cent in the first round – higher than her father’s highest score of 17.8 per cent.

A France Inter radio listener named André called in from northern France this week to say he voted for Hollande last year but would vote FN in next year’s elections. “We feel abandoned,” said the 60-year-old unemployed worker living on €500 per month. “Madame Le Pen has nothing to do with what her father was... It’s not at all the same discourse... I say, ‘Why not?’ ”

Almost as an afterthought, André added: “Monsieur Valls [the interior minister] and Monsieur Ayrault [the prime minister] celebrated the Eid at the grand mosque. We didn’t see them at Notre Dame at Easter.”

Far right advance
The FN thrives on economic crisis, but the populist far right is also advancing in countries with virtually no economic problems, such as Norway and Switzerland. Perceived Islamicisation through immigration may be an equally important cause. “Today, more than one European in two, more than one Frenchman in two, says he is hostile to the presence of Muslims, that he no longer recognises his own country,” says the political scientist Roland Cayrol.

In Brignoles, scene of the FN’s latest victory, north African Arabs moved into the old town after it was abandoned by affluent whites. Now locals complain of the prevalence of beards and headscarves.

Unlike her father, Le Pen does not make anti-Semitic remarks. She emphasises the “evils” of immigration and Islam less often than Jean-Marie did. Her top advisor, Florian Philippot, is a graduate of the elite École Nationale d’Administration, and a former aide to the left-wing sovereignist politician Jean-Pierre Chevènement.

Where Jean-Marie was an economic liberal, Marine is social. She promises, for example, to lower the retirement age to 60. But Europe is her greatest bugbear. When she’s elected president of France, Le Pen promises, she’ll pull out of the euro zone and EU altogether.