Refugee from the Taliban, said to be aged 110, reaches Bavaria 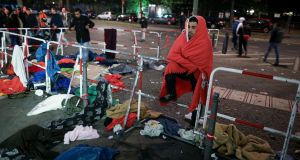 A migrant waits on Wednesday in Berlin in the premises of the State Office for Health and Welfare for registration and allocation of a shelter. Photograph: Getty Images

Germany’s refugee crisis broke another record when an Afghan family arrived in Bavaria on Wednesday carrying their patriach – a deaf-blind man they claim is 110 years old.

Police said the nine-member family, including four children and a pregnant woman, arrived in Passau after a month-long hike from Afghanistan. The man’s daughter, who said she was 60, claimed her bearded father had been born on January 1st, 1905, but has no papers to verify his age.

“Even if the man is 90, that trip was one hell of a journey,” said local police spokesman Werner Straubinger.

An interpreter at the Passau registration facility said the the man was clearly very old, so stooped he could only walk a few steps supported by a cane. The younger men in the family took turns carrying him on the journey from Baghlan, just north of Kabul, through a dozen countries.

They reportedly decided to flee after three men in the family were killed by the Taliban and their situation in their homeland became untenable.

The new arrival from Afghanistan may now be Germany’s oldest inhabitant because the previous record-holder, 111-year-old Charlotte Klamroth, passed away last May.

The minister has suggested airport-style controls at all border crossings, refusing entry to non-EU citizens obliged under the Dublin rules to file an asylum application in their point of entry to the bloc.

“We know this already from airport procedures (that) you can hold someone at an airport, check whether his asylum request is obviously unfounded and send him back,” said the minister on Berlin’s Inforadio.

Germany’s federal labour office has dampened expectations that refugees arriving in the country will fill the looming skills shortages left by an ageing society.

There was “tremendous potential” in the new arrivals, the agency said on Wednesday, given that two-thirds of arrivals were under 30 years old.

But with 80 per cent holding either no formal qualifications, or skills not recognised in Germany, the agency warned that the country needed to take a long-term view if wanted to profit from the migration wave.

“The people who are coming to us are not the trained employees of tomorrow but the day after tomorrow,” said Raimund Becker of the federal labour office.

While Germany’s jobless rate fell in September to a new low of 2.7 million, or 6.2 per cent, the rate of welfare recipients among asylum seekers jumped 20 per cent in September to 161,000.