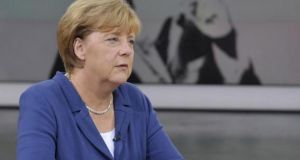 Angela Merkel: ‘The issue of asylum could be the next major European project, in which we show whether we are really able to take joint action,’ she told ZDF public television. Photograph: Jürgen Detmers/AFP/Getty Images

Europe’s growing refugee crisis will prove a greater test for the bloc in the long term than the standoff over Greece, according to German chancellor Angela Merkel.

Ahead of a crucial vote on Wednesday on whether Berlin will back a third aid package to Greece, the German leader said the euro challenge paled next to the historic challenge posed by the explosion of inward migration to the continent.

“The issue of asylum could be the next major European project, in which we show whether we are really able to take joint action,” she told ZDF public television.

New figures out this week are likely to forecast that a record rise in those seeking asylum in Greece will reach record levels of over 600,000 - up a third on previous, already record, estimates.

This was proving a “huge challenge” for the authorities, the German leader said, but she did not repeat claims from members of her government that the country was “overwhelmed”.

EU countries would not solve this crisis if they “operate in standard mode”, she said, adding that she had discussed with European Commission president Jean-Claude Juncker the need for a common asylum policy. Germany accepts the largest absolute number of asylum seekers in the EU and believes many others are not pulling their weight.

With winter on the way, Dr Merkel added that Germany and the EU would have to find a way of prioritising resources for asylum seekers for those most in need, in particular those coming from war zones such as Syria.

On Greece, the German leader said she saw no room for outright relief on Greek debt but spoke of “wriggle room” on the interest rates and maturities of its EU/IMF loans.

The Greek government was working “far differently than in previous months (with) a realisation that the country needs reforms to get back on its feet”.

As Dr Merkel works to limit rebellion of bailout sceptics in her own benches ahead of Wednesday’s vote, she expressed confidence that the International Monetary Fund (IMF) would participate in Greece’s third bailout.

The fund, brought on board by Berlin in the euro crisis, has yet to commit and its managing director, Christine Lagarde, has said it will make a decision in the autumn, depending on Greece’s reform progress.

“I have no doubts that what Ms Lagarde said will become reality,” said Dr Merkel.

“Ms Lagarde . . . made very clear that if these conditions are met, she will recommend [participation]) to the IMF board.”