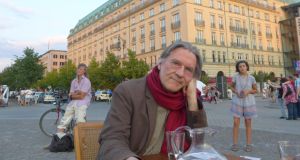 Ralph Boes, on hunger strike since July 1st in protest at Germany’s welfare system, waits it out on Pariser Platz. Photograph: Derek Scally

The square on the eastern side of Berlin’s Brandenburg Gate is known officially as Pariser Platz and unofficially as the “living room of the republic”.

There’s so much life around here – tourists taking selfies, hurried locals on bikes, tired Roma women begging – it’s as if the broad square is making up for its 28 years in the dead zone around the Berlin Wall.

In the middle of it all, adjacent to the five-star Hotel Adlon, a bespectacled man sits at a table with an empty seat opposite. Anyone is welcome to pull up the chair and talk to Ralph Boes, who today is on day 57 of a hunger strike he calls “an experiment in truth”.

Boes is protesting in the most public way possible against Germany’s decade-old economic and social reforms. The reforms, which cut welfare and liberalised the job market, have run in parallel with chancellor Angela Merkel’s decade in power.

Many, Merkel included, see them as a crucial part of Germany’s return to economic health. According to Boes, however, the reforms have sacrificed the dignity of the individual – a fundamental right guaranteed in the first article of Germany’s postwar constitution.

He says his protest concerns everyone in Europe, as the Merkel Republic demands neo-liberal welfare reforms along German lines as a precondition for EU/IMF crisis loans.

When Merkel came to power in 2005, Boes was a manager in a retirement home. He left the following year. Though technically unemployed since then, he says he has been engaged full-time on his campaign fighting Germany’s reformed welfare system. But he soon learned that the system fights back.

“The system is there to spread mortal fear and to make people compliant, even if it means a future of working poverty doing senseless jobs,” says Boes. “Our system only values people that work. Everyone else has no value, even if they are contributing to society in other ways.”

Boes is on full sanctions, has filed a challenge against the practice and, after a victory at a regional court, hopes Germany’s constitutional court will now take up his case.

Behind the welfare reforms lurks a stark reality. If you lose your job in Germany, you are entitled to a year of dole payments equivalent to two-thirds of your last salary. Then you drop down to the basic welfare payment (currently €399 a month), with additional payments for children, housing and transport.

The great unspoken of Angela Merkel’s career is how much she has benefitted politically from measures she once ridiculed. After her predecessor, Gerhard Schröder, presented the first reform measures to the Bundestag in 2003, Merkel remarked: “That wasn’t exactly a big deal.”

“The price we paid for labour market reforms has been a rise in the working poor,” says Dr Wolfgang Strengmann-Kuhn, social policy spokesman for the opposition Green Party. “Topping up low-wage jobs with welfare has turned into a subsidy for companies.”

Two kilometres north of the Brandenburg Gate, the reforms are still being fought over, day after day, in Berlin’s welfare court.

Reforms triggered a tsunami of legal challenges. In 2010, they peaked at more than 30,000 in Berlin alone. The court almost tripled its number of judges to 137; more than 3,000 challenges to welfare office decisions are still filed here monthly.

Even judges who say the reform promise was correct – “to support but also make demands” of welfare recipients – admit that it has been a bureaucratic disaster. The original legislation was so sloppily worded that it has been updated 70 times in a decade. The Berlin court has a 23,000-case backlog – enough work for a year.

Ole Beyer, a court spokesman and judge, says diplomatically: “The goal to achieve a just result in each individual case is praiseworthy, but the result is a very complex system.”

Outside, the couple’s lawyer, like many judges here, says the reforms were good in theory but “catastrophic” in practice.

“Every aspect of people’s lives are open for scrutiny in the courts,” says Hans-Jürgen Domröse. “I’ve seen this system take people and break them – driving some to suicide. Many just don’t understand what the system wants from them, or why they are being sanctioned.”

As he clips his briefcase closed, he adds: “This is no model for Europe. This circus can’t go on.”

Still, the circus continues at the Brandenburg Gate. A pink stretch Humvee glides past Ralph Boes, and unseen passengers study the man at the table from behind tinted windows. Off to one side, a local woman feels “torn” by his campaign.

“I understand him because the system is tough,” says Andrea Rösler. “But some people need pressure to find work or else they’ll just live off others.” Polls suggest that around 70 per cent of Germans agree.

As Merkel and her predecessor’s welfare reforms mark their first decade, the battle continues. Adjacent to the Brandenburg Gate, a sign flaps in the breeze on the facade of the Academy of Fine Arts: Nichts ist erledigt.