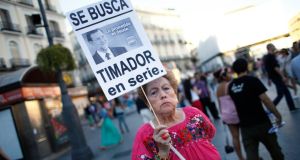 A woman holds a placard depicting Mariano Rajoy that reads “Wanted, serious con artist” during a protest calling for the Spanish prime minister to step down due to his implication in a corruption scandal, at Madrid’s landmark Puerta del Sol. Photograph: Reuters/Juan Medina

The appearance before members of congress follows weeks of pressure from opposition parties who say Mr Rajoy has failed to give a convincing explanation in response to allegations his Partido Popular (PP) for years received illegal donations from companies and used the money to make unlawful cash payments to senior party members.

The former treasurer of the party, Luis Bárcenas, who is in prison facing trial for fraud, made the allegations. The contents of notebooks he apparently kept, detailing the illegal donations and payments, have been published in national newspapers over the last six months. The documents show that Mr Rajoy was among those who allegedly received payments from the slush fund.

Denies claims
However, although the affair has dominated the political scene for months, the prime minister has been notoriously reluctant to talk about the issue. He has denied the charges and insisted it is based on malicious rumour designed to undermine his government.

“A prime minister can’t always be coming out every day to face insinuations, rumours and self-seeking information of every kind that is published,” he said recently.

But the allegations have continued to come thick and fast. Last month, El Mundo newspaper published text messages exchanged between Mr Rajoy and Mr Bárcenas last March, shortly before the former treasurer was jailed. The prime minister’s messages seemed to offer support and encouragement to Mr Bárcenas, fuelling suspicions the former treasurer was blackmailing Mr Rajoy with the allegations because the PP had not done more to clear his name and keep him out of prison.

One of the text messages read “Luis, be strong”. The opposition Socialist Party has made an online video wryly titled Mariano, Be Strong, which shows archive clips of the prime minister repeatedly offering his support to Mr Bárcenas before the scandal broke and struggling to answer journalists’ questions about the case more recently.

The opposition has grown impatient with Mr Rajoy’s refusal to discuss the Bárcenas case in parliament. The Socialist Party has even threatened to seek a no-confidence motion against the prime minister if he fails to offer a full explanation today, even though he would almost certainly survive such a vote due to his party’s congressional majority.

Difficult task
Polls suggest Mr Rajoy’s aim of persuading Spaniards that he and the party are untainted is ambitious. A study by Metroscopia polling firm showed nearly 90 per cent of people don’t believe his appearance before congress will clarify the case. Only 14 per cent believed his denials.

The investigation is moving slowly, but on Tuesday the pressure increased on the governing party when a judge summoned three members of the PP who hold or have held senior posts, including Mr Rajoy’s deputy, María Dolores de Cospedal. They will testify in mid-August. Also on Tuesday, several hundred protesters gathered in Madrid to voice anger at the PP’s handling of the Bárcenas case. More protests are organised for today.