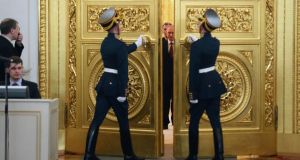 President Vladimir Putin arrives to sign a treaty in the Kremlin yesterday with Crimean leaders on reunification with Russia. Photograph: Sergei Ilnitsky/EPA

Vladimir Putin claimed Crimea as part of Russia’s territory yesterday, defying a storm of international protest that could isolate his country for years to come.

Within minutes of giving a passionately patriotic speech to the Russian elite, Mr Putin joined the leaders of Crimea in signing a treaty that redrew the borders of Ukraine and transferred the strategic Black Sea peninsula to Russia. Sevastopol, the Crimean port that is home to the Russian fleet, was absorbed into Russia as a separate entity in the same agreement.

Crimea has been the epicentre of a struggle between the revolutionary authorities in Kiev and those loyal to Russia since Viktor Yanukovich, the Ukrainian president, was ousted in late February after three months of anti-government protests.


Secession welcomed
Russia then deployed thousands of troops in Crimea, surrounding military infrastructure and taking control of airports. At a referendum on Sunday, the overwhelming majority of Crimeans voted to secede from Ukraine and join Russia.

“In the hearts and minds of people, Crimea has always been and remains an inseparable part of Russia,” Mr Putin said in a televised address to Russian parliamentarians, regional and religious leaders in the gilded Saint George’s hall in the Kremlin palace yesterday.

Delivered with unflinching conviction, his 50-minute speech, which delved into history to justify Russia’s claim to Crimea, drew tears to the eyes of many in the packed hall and was frequently interrupted by rapturous applause.

Conquered by Imperial Russia in the 18th century, Crimea was gifted to Ukraine by the Soviet leader Nikita Krushchev in 1954 in what, once the USSR fell apart, came to be viewed by the Kremlin as a strategic blunder.

After the Soviet collapse, Russia felt it had been “robbed” of Crimea, Mr Putin said, while the people of the Black Sea peninsula resented being summarily handed from one power to another “like a sack of potatoes”.


Western meddling
Mr Putin accused the United States and the European Union of meddling in Ukraine and supporting the anti-government protests that culminated last month in what he has repeatedly described as an illegal coup.

Although painted as a pro-European, democratic movement, Ukraine’s opposition had fallen prey to “neo-Nazis, anti-Semites and Russo-phobes”, plunging the country into ungovernable chaos. Russia had no choice but to come to the defence of the people of Crimea against attack from violent Ukrainian nationalists, he said.

Mr Putin has declared the right to protect ethnic Russians in former Soviet republics, even using force if necessary.

However, in remarks that might help ease international concern about Russia’s neo-imperial ambitions, he pledged to stop with Crimea and not divide Ukraine further.

“Don’t believe those who scare you with Russia, who are shouting that other regions will follow in Ukraine,” he said. “We don’t want to divide Ukraine. We don’t need that.”

Reclaiming Crimea was a strategic move aimed at shoring up Russia’s position in the event of Nato’s further expansion. “I can’t imagine how we would go to Sevastopol as the guest of Nato sailors,” Mr Putin said. “Better that they come to Sevastopol as our guests.”

Mr Putin said he refused to be cowed by US and EU threats of sanctions that could damage Russia’s already-faltering economy and condemn his country to international isolation.

Mr Putin thanked China, which abstained from voting in a western-backed United Nations resolution condemning the Crimea referendum at the weekend.

In a move that could weaken the EU’s stand on sanctions, he appealed to Germany to accept Russia’s reunification with Crimea just as Moscow came to terms with the reunification of East and West Germany after the Berlin Wall came down in 1989.


Accusations of hypocrisy
For much of the time Mr Putin was openly hostile to the West, accusing the US and the EU of hypocrisy. He said the secession of Crimea was no different from Kosovo’s split with Serbia in 2008 that was generally accepted by western powers, although opposed by Moscow.

Appealing to his people’s sense of wounded pride, Mr Putin said Russia had been repeatedly overlooked and even betrayed by the West during international crises over the past 20 years. “Time and time again they cheated us, took decisions behind our back, presented us with completed facts. So it was with Nato’s expansion to the east, the deployment of military infrastructure at our borders. All the time they told us the same thing: ‘Well, this doesn’t concern you.’”

Reclaiming Crimea marks a turning point – a time to end what Mr Putin called the “rhetoric of the cold war” and recognise Russia as an “independent, active participant in international life with its own national interests that had to be taken into account and respected”.