Pussy Riot protest band members, including Maria Alyokhina and Nadezhda Tolokonnikova, were released from a police station on Tuesday (February 18) after being held in connection with a theft in the Winter Olympics host city of Sochi. Video: Reuters 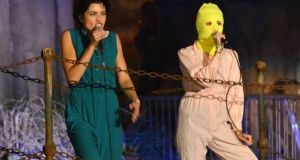 Pussy Riot are to release a new song celebrating the vagina, in what they are labelling an unashamed feminist riposte to Donald Trump and his recorded boast about grabbing women “by the pussy”.

In typically provocative style, the video includes the lyrics: “If your vagina lands in prison, then the whole world’s going to listen.” And: “Don’t play stupid, don’t play dumb, vagina’s where you’re really from.”

Tolokonnikova said she recorded the song in February with US musician, guitarist and producer Dave Sitek, whom she described as “one of the biggest feminists I’ve ever met”. The video was shot in Los Angeles.

Tolokonnikova said Sitek was inspired by her phrase: “Does your vagina have a brand?” “So it made total sense to write a song which celebrates [the] vagina with him,” she said.

“This song could be considered an answer to Trump. But I believe the idea of powerful female sexuality is much bigger than any populist megalomaniac man - vagina is bigger than Trump.”

Pussy Riot are expected to release two more videos commenting on both US and Russian politics as the band responds to the growing influence of populism and nationalism.

Tolokonnikova said the spread of “patriarchal and misogynist ideas” was akin to sexually transmitted disease. “Politicians are praising strong leadership. Trump openly supports the authoritarian methods of Vladimir Putin. And it’s scary. It’s not the world in which I want to live.”

Tolokonnikova is no longer working creatively with Pussy Riot co-founder Masha Alyokhina, who is currently touring with the Belarus Free Theatre.

The pair spent 16 months in a Russian jail following their anti-Putin “punk prayer” in Moscow’s Christ the Saviour cathedral.