Crowd estimated by police to be roughly 2,500 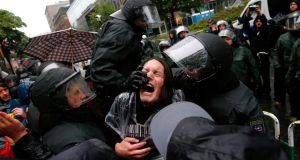 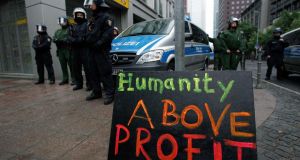 Thousands of demonstrators from the anti-capitalist Blockupy movement cut off access to the European Central Bank in Frankfurt today to protest against policymakers’ handling of Europe’s debt crisis.

Clasping signs with slogans such as “humanity before profit”, the protesters gathered in the rain to block roads including those leading to Deutsche Bank’s headquarters in the city’s financial district.

The crowd, estimated by police at roughly 2,500, was met by armed police wearing helmets and riot gear and accompanied by Alsatian dogs. Trucks with water cannons stood by and a helicopter hovered overheard.

At least 20 protesters held up inflatable mattresses with the slogan “War Starts Here” written on them. Police said some protesters had thrown stones and there were some clashes at the barricades, but the protest was generally peaceful so far.

Europe’s Blockupy movement was formed after the Occupy Wall Street movement in 2011.

“The aim of this blockade is to prevent normal operations (at the ECB),” said Blockupy spokesman Martin Sommer, adding that some people who had tried to come to work had been sent home by the protesters.

Governments struggling with large debt burdens have cut spending and raised taxes, contributing to widespread recession across the euro zone, while many families are deep in debt or have lost their homes after property bubbles burst. The German economy has been relatively resilient to the crisis.

Many of Frankfurt’s banks have urged staff to take today as holiday after a state holiday yesterday.

The ECB said it had taken measures to remain operational and ensure the safety of its staff.

The demonstration, held roughly a year after police detained hundreds of people for defying a temporary ban on protests at a similar four-day event in Frankfurt, precedes Europe-wide gatherings planned tomorrow.