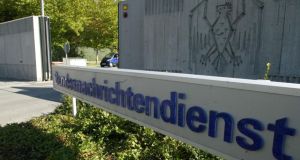 The Snowden affair has made German politicians more concerned regarding what information the Germany’s intelligence agency Bundesnachrichtendienst (BND) releases to them. Photograph: Alexandra Winkler/Reuters

As her interior minister flies to Washington today for talks, Dr Merkel tells today’s Stern magazazine she “first took note” of the alleged practices through media reports. Her Free Democrat (FDP) coalition partner has decided to crank up the pressure in what is an area of traditional importance to the party and its core voters.

“America wants to have certain data, for instance flight (passenegrr) data, but if this is how America deals with its partners then we in Europe have to ask whether this is how we define a partnership with sensible standards,” he told The Irish Times. “If we don’t get any satisfaction then we should put data-sharing on ice.”

He said the Snowden allegations appeared to confirm decade-old “suspicions” and “fears” in the parliamentary committee of widespreed secret-service siphoning of telecommunications data. “But what is technically possible does not always have to be permissable,” he said.

Green MP Hans-Christian Ströbele, also a member of the same Bundestag BND oversight committee, said it was “just a matter of time until the government admits something”. A spokesman for the federal interior ministry declined to comment yesterday on FDP calls for a freeze on data-sharing, saying the government did not want to pre-empt talks in Washington.

A week ago, the European Parliament adopted a cross-party motion backing the suspension of data-sharing deals. European home affairs commissioner Cecilia Wallström has stressed the need for “complete transparency” in an ongoing review with the US of data-exchange programmes of flight data and terrorist financing.

“Considering the context in which these conversations will take place, we count on the US’s full co-operation in disclosing and sharing all relevant information,” she said.

Internet providers here say the Snowden affair has exposed the yawning gap in Germany between the principle of tight privacy laws and the reality: a culture of deference when the BND comes calling. “If a court order comes, a provider is obliged to hand control of a line to the intelligence service,” said Klaus Landfeldboard, member of the German Internet Provider Assocation.

There are no checks and balances to ensure the BND is not saving more information from a line than a court order permits, he said, nor what happens to the data recorded. “The BND is supposed to be controlled by the Bundestag control committee,” he said, “but committee members have no way of knowing anything more than what the BND chooses to tell them.”