Some dispossessed are breaking into vacant buildings taken over by banks

It does not take a lot to get evicted in Spain: anyone in mortgage arrears of three months or more can be targeted. With some 200 evictions taking place daily across the country, more people are taking matters in their own hands and fighting back. 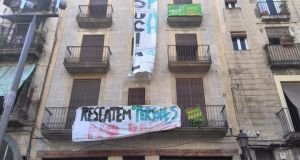 The building at Plaça del Pedró in Barcelona that has been taken over by squatters. The original lock on the building’s front door has been ripped out and replaced, and each studio-apartment door bears the marks of a cutter where the lock has been changed. Photograph: Mary Boland

In Barcelona’s medieval Raval neighbourhood, renowned for much of the 20th century as the hub of the city’s drug, prostitution and crime underworld, a cloth with an anti-bank slogan painted on it flaps in the breeze on the facade of a renovated building in the recently gentrified Plaça del Pedró.

Inside, in a sparsely furnished one-room apartment on the third floor, a photograph taped to a wall shows a suntanned, sporty-looking blonde in a black swimsuit reclining seductively across the bow of a luxury boat. She is gazing at the camera with confidence and a touch of nonchalance, as though secure in the expectation that life will always be this good.

Tania Hidalga (39) is the pin-up girl. Today, coughing relentlessly, she sits wearily on a donated second-hand sofa and looks across at her former self of seven years ago. “Yes, that was me, that was life then,” she says softly, between gasps. “Another world, eh?”

She was once the proud owner of an apartment on the Costa Brava near Empuriabrava, one of the largest marinas in the world, but Hidalga’s comfortable life fell apart after she lost her job as an administrative assistant in 2010.

Humiliating journey
Her relationship ended – her partner owned the boat – and she was evicted last year for not paying her mortgage after her 10 months of dole entitlement ended. She describes a humiliating journey between then and now.

For eight months she lived in a homeless shelter and depended on a nearby church for handouts of groceries. Nights were spent in fear: “There were drug addicts, criminals, prostitutes all living there. But that’s not me. I’m not a criminal – I’m a worker. I want to work and earn my living.” Her physical and mental health suffered severe setbacks. Now, she says, she is starting all over again in the Raval.

Anyone looking closely at No 5 Plaça del Pedró, however, will notice something unusual. The original lock on the building’s front door has been ripped out and replaced, and each studio- apartment door bears the marks of a cutter where the lock has been changed. Hidalga is not renting this flat. She is not even supposed to be here. But in July she and three similarly homeless families, with the help of housing lobby the Platform for Mortgage Victims (Plataforma de Afectados por la Hipoteca, known as the PAH) broke into the vacant building, now owned by Caixa Banc, and took up residence.

“When we were moving in, the neighbours were all there supporting us and cheering us on – they even helped us,” says Hidalga, her eyes welling up as she proudly points out her fridge-freezer, bed and sofa, all donations from the local community.

Post-boom squatters
Hidalga and her new neighbours are the post-boom squatters, occupying one of 13 bank-owned properties taken over by the platform in Catalunya and used to house people who have been evicted after getting into mortgage arrears. Such occupations are illegal, acknowledges Gala Pin (32), a spokeswoman for the housing lobby, but she distinguishes this kind of takeover from typical squatter invasions.

“We are of course influenced by the squatter movement but there are two big differences: we always occupy buildings that belong to banks, or to big firms; and are always trying to negotiate with the owners in order to try to [pay] a social rent.”

The six-storey building was renovated by a property speculator who subdivided it into studios for short-term tourism rentals but who failed to get permission for the modifications. It lay empty for three years before falling into the hands of Banco de Valencia, which merged with Caixa in July.

The platform organises these occupations not as a first option but as a desperate last resort, says Pin.

Civil disobedience
“The law says it’s illegal but the platform practises civil disobedience only when there are no more alternatives. This is a tactic, a technique that has been used in the history of humanity for changing laws that were not fair. So maybe it’s illegal – but it doesn’t mean that it’s not legitimate.”

She points out that Banco de Valencia was bailed out with the help of €3 billion in public money, later supplemented by €4.5 billion from the Spanish government’s Fund for Orderly Bank Restructuring. The platform is now trying to negotiate with Caixa Banc in order to secure the occupants’ tenancy at reasonable rents.

Downstairs from Hidalga, Bolivian-born Marcela Medina (36) lives with her two children, Sarah (5) and Hashim (8). As the children play on the floor of the apartment they call home, Medina, widowed mother of two Nuria Ibañez (58) and her son Daniel Burgues (22), who is housed with his huge, gentle dog Muxu in a studio opposite his mother’s, explain how they ended up living illegally in a building belonging to a bank.

Medina, who lived in luxury in a 145sq m duplex in central Barcelona, says she was tricked into signing the debt into her name. Her husband disappeared, Medina was evicted, her apartment was auctioned and she and her two children were left on the street while the bank pursued her for nearly €150,000, half the outstanding debt. However, with the help of the platform, which identified unfair clauses in her mortgage contract, that amount has been reduced to only €5,000, to be paid over several years. Still, she is homeless and works odd jobs to try to make ends meet. She gets no benefits from the state.

“It’s like you’re no one when this happens to you. You’re a piece of dirt when you go into the bank and ask for help. They call you and harass you day and night. You can’t live with dignity.”

Shock
Ibañez, whose bank agreed to cancel her debt after she handed over her keys, says the shock of finding herself homeless made her question her ability as a mother. “You look at your children and you ask yourself: how could I have done this? How could I have messed up like this?”

She begins to cry, as though talking about it is making her relive the worst moments. “You assume it’s all your fault, that you’re the failure. But we’re not. That is what I’ve learned from this, from the platform and from others who have gone through it. We are not entirely to blame.”

In some cases, the platform has successfully negotiated a deal with the water and electricity companies to retain supplies to an occupied building but this is not always possible.

Hooded electricians
There is talk among the residents here of how hooded electricians and plumbers swept into the building and worked rapidly and anonymously to ensure the utility supplies were secure – and then disappeared as quickly.

“It’s not that we’re stealing from our neighbours’ meters or anything,” says Burgues. “It’s from the general supply. The neighbours know this.”

Public support for occupations such as this has been increasing, says Pin.

“The social acceptance of what it means to occupy an empty building belonging to a bank that has also been rescued with public money has changed. In most cases when it comes to court the judge says it’s not a crime . . . we think the law will change. It’s common sense that where people are evicted and the banks have all these buildings that are empty, with no function . . . well, if they don’t give them some kind of use, then we will find a use for them.”