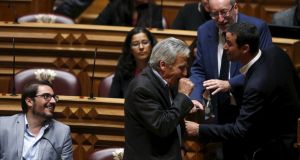 Portugal’s opposition Socialists have pledged to topple the centre-right minority government with a no-confidence motion, saying the president had created “an unnecessary political crisis” by nominating Pedro Passos Coelho as prime minister.

The move could wreck Mr Passos Coelho’s efforts to get his centre-right government’s programme passed in parliament in 10 days’ time, extending the political uncertainty hanging over the country since an inconclusive October 4th election.

Mr Coelho was named prime minister on Thursday after his coalition won the most votes in the national election but lost its majority in parliament, which swung to leftist parties.

This set up a confrontation with the main opposition Socialists, who have been trying to form their own coalition government with the hard left Communists and Left Bloc, who all want to end the centre-right’s austerity policies.

The Socialists and two leftist parties quickly showed that they control the most votes when parliament reopened on Friday, electing a Socialist speaker of the house and rejecting the centre-right candidate.

“This is the first institutional expression of the election results,” Mr Costa said. “In this election of speaker, parliament showed unequivocally the majority will of the Portuguese for a change in our democracy.”

Early Friday, Mr Costa’s party gave its lawmakers a mandate to “present a motion rejecting any government programme” that includes similar policies to the last government.

After the national election, Passos Coelho tried to gain support from the Socialists, who instead started negotiating with the Communists and Left Bloc.

Antonio Barroso, senior vice president of the Teneo Intelligence consultancy in London, said Mr Costa was likely to threaten any Socialist representative with expulsion if they vote for the centre-right government’s programme.

“Therefore, the government is likely to fall, which will put the ball back on the president’s court,” Mr Barroso said in a note.

The political stand-off has prompted concerns that the economy’s recovery after a bailout could stumble.

Passos Coelho’s government pursued austerity measures and tax hikes during the past four years under a bailout which plunged Portugal into a three-year recession. The economy returned to growth last year and accelerated this year.