Political transformation of Spain likely to be driven by Podemos 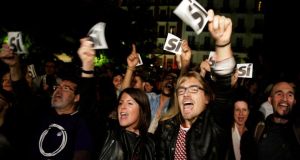 Supporters of Podemos in Madrid celebrate after the regional and municipal elections in which the big loser was Spain’s ruling Popular Party. Photograph: Andrea Comas/Reuters

“The big cities are the engine of political change,” Podemos party leader Pablo Iglesias told rapturous supporters after Sunday’s regional and municipal elections. If that is the case, then Spain’s political transformation is indeed under way, with Podemos the driving force.

Formed only in early 2014, Podemos did not compete under its own name in the elections for town and city halls across Spain held on Sunday. Instead, it formed coalitions with like-minded, left-leaning movements, a strategy that saw it involved in the unseating of administrations in Madrid, Barcelona and several other major cities – assuming it can form governing pacts with other parties.

In Barcelona, a Podemos-backed coalition clinched 11 seats in the city hall, narrowly beating the powerful Catalan nationalists of Convergence and Union (CiU).

Elsewhere, the big loser was the conservative Popular Party (PP), which has governed Spain since 2011. Despite the fact that the economy is expected to grow faster this year than any other in the euro zone, prime minister Mariano Rajoy’s harsh austerity policies and a torrent of corruption scandals seem to have weighed on voters’ minds.

Although the PP remained the party with the most votes overall in the municipal elections and in the 13 regions where local parliament elections were held, its loss of support leaves it without governing majorities and therefore in opposition in many instances .

Madrid is the most glaring example. After 20 years of absolute majorities in the city hall, the PP vote plummeted, leaving it only one seat ahead of the Podemos-backed candidate, Manuela Carmena. With the PP isolated by a lack of potential coalition partners, Carmena, a 71-year-old former judge, appears to have reclaimed the city for the left.

For Podemos, Madrid was a key electoral battlefield, due partly to its status as a conservative stronghold, but also its notoriety as a hotbed of sprawling, often illegal construction activity during the property boom that preceded Spain’s 2008 crash. The city of Valencia, on the Mediterranean coast, is a similar case.

Accompanying Podemos in the mission to regenerate Spanish politics is Ciudadanos, a new, business-friendly party which also has corruption in its sights and captured nearly 7 per cent of municipal votes. Although its performance was less spectacular than Podemos, it has established itself as a force and could be kingmaker.

Both new parties are in strong positions ahead of the general elections, expected to be held by the end of the year.

While the PP lost 2.5 million votes on Sunday, compared to municipal elections four years ago the Socialist Party’s loss of 700,000 votes was seen as reason for moderate optimism. The Socialists lost many voters to Podemos, but if the two work together, they could control key cities and regions.

The frenzy of negotiations under way across Spain could be equally as important as the elections themselves. In March, a regional parliament election in Andalusia failed to deliver a majority for any party and the wrangling over conditions for a governing pact has left that region’s politics at a virtual standstill.

“We’re in a sort of limbo,” says José Ignacio Torreblanca, a political scientist who has written about Podemos. “It’s not quite the end of the two-party system, but it is the end of the two big parties being able to govern on their own.”