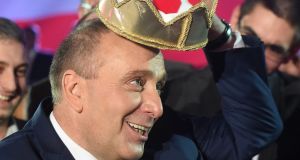 Since taking office it has attracted controversy for radical reform of state media, state intelligence and the constitutional tribunal, as well as the justice and civil servant systems.

Those reforms have sparked concerns – and street protests across Poland – that the PiS is undermining democratic structures.

PiS officials deny such claims, insisting their reforms are an overdue correction to encrusted state cronyism. But new Civic Platform (PO) leader Grzegorz Schetyna hopes he can channel that frustration to revive his party’s fortunes.

“Enough of this embarrassment, enough of PiS,” said Mr Schetyna after he was elected by 91 per cent of PO members. That the turnout was 52 per cent, and he was the only candidate, speaks volumes about the task ahead.

With the PO down to just 14 per cent in polls and showing signs of collapse, the new leader has admitted there is a “long road ahead” to rebuild in opposition before it was in a position to challenge the PiS.

Post-election analysis in October showed that Polish voters backed the PiS in the hope of change and were tired of endless PO scandals and frustrated at a perceived prosperity gap,

Three months on, the scale of the PO defeat has raised questions about the viability of the party, co-founded in 2001 by Donald Tusk, who was prime minister from 2007 to 2014.

Mr Tusk and Mr Schetyna were both young men in the Solidarity movement and close political allies in power.

Mr Schetyna, an MP since 2005, served as speaker of the Sejm (the lower house of parliament), foreign minister and all-purpose political problem-solver for Mr Tusk, who once dubbed him a “a mix of Shrek and Gladiator”.

The two fell out in 2009 when Mr Tusk ditched his ally following a short-lived scandal. When Mr Schetyna complained at his treatment, Mr Tusk’s memorable reply was: “Boys don’t cry.”

The two parted ways and Mr Tusk ensured that a loyal ally, Ewa Kopacz, took over as prime minister when he departed for Brussels in 2014 to serve as European Council president.

Mr Schetyna’s distance from Ms Kopacz and the PO leadership spared him the post-election blowback and allowed him move into position.

Meanwhile, Poland’s government has announced a tax of 1.3 per cent on all retailers with a monthly turnover above 300 million zloty (€67 million).

The tax, hitting largely foreign-owned retailers such as Tesco, will rise to 1.9 per cent on weekends and holidays.