Polish doctor fired for refusing to allow woman have abortion

Prof Bogdan Chazan one of 3,000 physicians who have signed a ‘declaration of faith’ 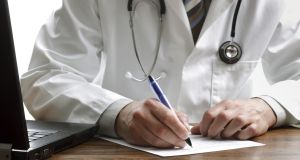 A doctor in Poland has been fired from the hospital he worked at after he refused to allow a woman have an abortion. Photograph: Thinkstock

A doctor in Poland has been fired from the hospital he works for after refusing to allow a woman have an abortion because of a “conflict of conscience” with his Catholicism.

In April this year, the pregnant woman asked Professor Bogdan Chazan, director of Warsaw’s Holy Family Hospital, for an abortion because her own physician had diagnosed her unborn child with grave health problems.

Prof Chazan sent the woman a letter saying he could not agree to an abortion in his hospital because of a “conflict of conscience,” and instead gave the woman the address of a hospice where, he said, the child could get palliative care once born.

The baby was born at a different hospital with, according to a doctor there, severe head and facial deformities and a brain that was not viable, conditions which the doctor said would result in the child’s death within a month or two.

The event has stirred a new battle in a long-running war in staunchly Catholic Poland between conservatives and liberals over abortion, which along with homosexuality, contraception, and in vitro fertilisation, is defined by the church as sinful.

On Wednesday, Hanna Gronkiewicz-Waltz, the mayor of the Polish capital, said she was firing Prof Chazan from the hospital on the grounds that he did not have the right to refuse the abortion and did not inform the woman about the options for getting a termination.

Prof Chazan was one of 3,000 doctors and medical students who this year signed a ’declaration of faith’ affirming the Catholic church’s teaching that all human life is sacred from the moment of conception.

“The sole basis for the dignity and freedom of a Catholic physician is a conscience enlightened by the Holy Spirit,” said the declaration, which was unveiled at a Catholic shrine in the form of a stone tablet, a nod to the Old Testament’s Ten Commandments.

Prof Chazan has become a hero for devout Catholics, who say he is defending traditional values that are being eroded, and a focus of anger from liberals who say doctors’ first obligation is to patients, not to the church’s teaching.

Cardinal Kazimierz Nycz, the Catholic Archbishop of Warsaw, said in a statement he supported Prof Chazan. He said the dismissal was a “dangerous precedent, violating the rights not only of Catholics but of all people”.

In Poland, which prides itself on being the birth-place of newly-canonised Pope John Paul II, abortion is allowed if there is a threat to the mother’s life, if the foetus is seriously ill, or if the pregnancy is the result of rape.

Polish law gives doctors some leeway to refuse to carry out an abortion themselves for reasons of conscience, but it requires them to help the patient find alternative options for having a termination.

An inquiry commissioned by the mayor’s office alleged that Prof Chazan flouted that rule, that he did not inform the patient an abortion would be illegal after the 24th week of pregnancy, and ordered unnecessary tests which made her miss that deadline.

Prof Chazan does not deny that he refused to carry out an abortion, but disputed the findings of the inquiry. His lawyer said he may appeal against his dismissal.

“Today’s decision is the start of an attack on the conscience of doctors and people in management positions in the health service, it is a violation of their conscience,” Prof Chazan said in an interview with razem.tv, a conservative news portal.

“Abiding by the laws of nature, and first and foremost by the law that prohibits killing a person, will probably become a reason for eliminating these people from management positions.”

Professor Romuald Debski is a doctor at the Bielanski hospital, where the child whose termination Dr Chazan refused to carry out was born. Prof Debski has said doctors’ guiding principle should be the Hippocratic oath, not their faith.

“If Professor Chazan saw the life that he saved, he would have a different attitude,” Prof Debski said earlier this month.

He said the child had no brain and would be “dying for a month or two” thanks to the doctor.