Police use water cannon during far-right protest in Brussels 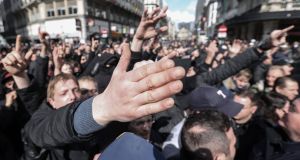 Anti-Islamic State demonstrators on Sunday at the site of the memorial for the victims of the March 22nd terror attacks in Brussels. Photograph: Olivier Hoslet/EPA

Brussels mayor Yvan Mayuer has said he is “outraged” that police allowed far-right groups to demonstrate on Sunday at a shrine to victims of last week’s double bombing.

Almost a week after the airport and metro blasts, which killed 31 so far, five people are in custody after 13 raids across Belgium and in Italy, while investigators have concluded their investigation at Zaventem airport.

Sunday’s stand-off came after Brussels authorities cancelled a “march against fear”, fearing it would divert resources from their investigation.

Opposing groups headed into the city anyway, converging on the Place de la Bourse. For days the square before the historic stock market building has been a peaceful, makeshift shrine of flowers and candles to the bombing victims.

Within minutes, however, the mood darkened as black-clad men marched on to the square holding a flag reading “Casuals against Terrorism”, chanting “We’re in our home” – an anti-immigrant chant.

Leftist groups booed and jeered the marchers, chanting “We’re all sons of immigrants” and “No to hatred”.

Police intervened with water cannon to empty the square.

“I am outraged that such scoundrels travelled here to disturb others at this place of remembrance,” said Brussels mayor Yvan Mayuer. “We were warned yesterday they could come, and I see that nothing has been done to prevent them from travelling to Brussels.”

The incident raises pressure on the government, already under fire for its response to the Tuesday attacks. Brussels transport authority has denied claims that the interior minister ordered an immediate shut-down of the Brussels metro after the 7.58am airport attacks.

Earlier on Sunday 13 raids took place in Brussels around around Belgium, all linked to terrorism offences.

“13 raids were carried out this morning... nine people in all were questioned and five of them were later released,” added a statement from the public prosecutor’s office.

The first man to be charged in connection with the Brussels attacks has been identified as Fayçal Cheffou, a 31-year-old Belgian national.

However Belgian authorities declined to confirm media reports that Mr Cheffou, a self-described journalist, was the “man in white” spotted in airport CCTV footage alongside the two suicide bombers, Ibrahim el-Bakraoui and Najim Laachraoui.

According to media reports, Mr Cheffou had a history of attempting to recruit asylum seekers to Islamist extremism in a Brussels city park housing refugee shelters.

Another man charged on Sunday with terrorism offences, Abderahmane Ameroud, was shot in the leg by police on Friday in the Brussels district of Schaerbeek where the bombings were planned.

On Saturday Belgian prosecutors brought similar charges against a further man, named as Rabah N., also accused of involvement in the French plot.

Djamal Eddine Ouali is believed to have provided a forged Belgian ID card for one airport bomber and for Salah Abdeslam, arrested in Brussels the week before last and awaiting extradition to France.

French interior minister Bernard Cazeneuve said that arrests of a 34-year-old man near Paris had “foiled an attack against France in advance planning”.