Degree of co-ordination between Kouachi brothers and Amedy Coulibaly disclosed 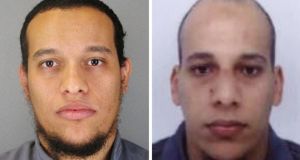 Said Kouachi (left) and Cherif Kouachi: the brothers sent a text message to Amedy Coulibaly an hour before the assault on Charlie Hebdo Photograph: Judicial Police of Paris/PA Wire

Six weeks after 17 innocents and three jihadi gunmen were killed in Paris, a detailed account has emerged in a four-page spread in Le Monde newspaper, based on access to the police investigation.

Previously unclear was the degree of co-ordination between Cherif and Said Kouachi, the brothers who killed 12 in the attack on Charlie Hebdo, and Amedy Coulibaly, who murdered a policewoman and four Jews in a kosher supermarket. Cherif and Coulibaly had met in prison, and their wives were close friends.

The Kouachi brothers sent a text message to Coulibaly at 10.19 on the morning of January 7th, one hour before the assault on Charlie Hebdo. Police believe Coulibaly walked with Cherif in the streets around the younger Kouachi’s apartment between midnight and 1am on the night before the killing started.

Call to the brothers

“It’s Said!” the older brother answered. “How are you? Al-Humdulillah [God be praised!]” There was laughter on the telephone and Said added, “Zarma [an Arabic slang interjection, comparable to ‘ya know’], this is war!”

Coulibaly’s internet record indicates that he began planning his attack on the Hyper Cacher supermarket at least two weeks in advance. He dispatched three jobless acquaintances from the banlieue south of Paris where he grew up to buy a car, bullet-proof vests, tear-gas grenades and knives.

Coulibaly paid them cash, and they called him “Dolly” after the cloned sheep. They feared Coulibaly because he’d beaten them with a baseball bat when angry.

These accomplices said they believed Coulibaly was preparing a hold-up. Because he knew he was under surveillance, Coulibaly used 13 different telephones, as well as phone booths, in the months preceding the attacks.

Said Kouachi took the train from Reims, where he lived, on the morning of the 7th. His wife, Soumya, told police the entire family were stricken with gastroenteritis and Said spent part of the night vomiting. “See you tonight or tomorrow,” he told her as he was leaving.

Cherif’s wife, Izzana, recounted that he was so nervous he could not eat the day before the Charlie Hebdo massacre. He spent the early morning of the 7th looking out the window and reading the Koran.

After murdering 11 people at the magazine office and gunning down a policeman nearby, the Kouachis blocked a car in traffic. “Get out,” they told the 64-year-old driver. “We’re taking your car. If the media talk to you, tell them ‘al-Qaeda Yemen’.”

Police found an ammunition clip, the black flag of Islamic State and Said’s identity card in the abandoned car. At no point did the Kouachis attempt to hide their tracks or silence witnesses.

When gendarmes arrived at the CTD printing plant on the morning of January 9th, Said Kouachi emerged to shoot at them. A gendarme shot him in the neck and he crawled on all fours back into the building. Michel Catalano, the plant director, gave him first aid.

The Kouachis allowed Catalano to leave. At 4.43pm, they came out shooting. Both died within two minutes. Said was hit by seven bullets and Cherif by 13.

During the siege, someone faxed 54 pages to the plant. “Je suis Charlie” was written on every page.