Exit poll shows opposition party on 39.1% of vote, with Beata Szydlo likely to be PM 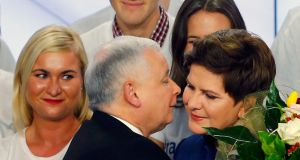 Poland’s conservative opposition Law and Justice party (PiS) should be able to govern alone after coming first in the country’s parliamentary election, a Sunday night exit poll showed . The poll showed PiS commanding 242 seats in the Polish parliament, out of a total of 460.

The ruling Civic Platform (PO) party conceded defeat after the exit poll came out. “Remember, we have not lost these [past] eight years,” prime minister Ewa Kopacz said.

The exit poll showed PiS, run by Jaroslaw Kaczynski, the twin brother of Poland’s late president Lech, winning with 39.1 per cent of the vote, while the Civic Platform had 23.4 per cent.

A victory by Eurosceptic, anti-immigration PiS is seen ending nearly a decade of economic and political stability in Poland and may push the country away from the European mainstream.

Poland has seen its economy, the largest in ex-communist central Europe, expand by nearly 50 per cent in the last decade. But PiS was able to tap into widespread anger that the fruits of growth have not been evenly shared among the country’s 38 million people. Distrustful of the EU and an advocate of a strong Nato stance in dealing with Moscow, the party opposes joining the euro zone any time soon, promises more welfare spending on the poor and wants banks to be subject to new taxation.

Beata Szydlo, the party’s candidate for prime minister, is poised to change the €500 billion economy with pledges to raise taxes on the financial industry, increase spending on child support and start a 350 billion zloty (€82 billion) central bank loan program.

“The promise that wealth will be shared fairly by everyone has prevailed,” said Ewa Marciniak, a political scientist at Warsaw University.

Michal Zurawski, in his mid-30s, who voted for PiS in the morning in central Warsaw, said he backed the party’s promises to tackle corruption as well as its economic programme. “Their offer is targeted at those who are less affluent and that suits me. Taking care of this group and creating better social and labour conditions for them is good – it will benefit Poland’s economy and the country as a whole,” he said.

Pensioner Jadwiga Horus said she voted for PO: “I prefer people who have proven themselves. Even if they make mistakes – PO is way better than the shameful PiS.”

On the campaign trail, Mr Kaczynski and other PiS leaders sought to tap into anger that the economic success is not more evenly shared out and into nationalist sentiment fanned by immigration fears, particularly among young voters.

“There is a broader phenomenon of a return to national, religious, community values being seen all across Europe,” said analyst Aleksander Smolar. “PiS uses clear . . . language in this respect.”

PiS advocates a robust Western approach towards Russia, especially following Moscow’s 2014 annexation of the Crimean peninsula in Poland’s eastern neighbour Ukraine. That might complicate any future attempts at bridge-building between the EU and Russia, currently the target of Western sanctions imposed over the Ukraine conflict.