The mother and brother of a woman suicide bomber who blew herself up during a police raid in Paris have been taken away by police for questioning, according to eyewitnesses. 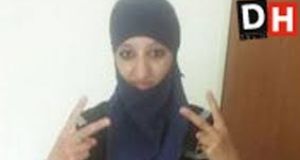 Hasna Aiboulahcen: Reported to be a cousin of Abdelhamid Abaaoud, the man believed to have masterminded the attacks

French forensic and medical experts are examining what remains of the woman who blew herself up during a police shootout after the Paris terrorist attacks.

She is believed to be Islamic State supporter Hasna Aitboulahcen.

The French woman (26) was heard engaging in an almost hysterical exchange with police shortly before she triggered a suicide belt, killing herself instantly.

Aitboulahcen, whose name was also spelled Ait Boulahcen, was reported to be a cousin of Abdelhamid Abaaoud , the man believed to have masterminded the co-ordinated series of bombings and shootings in Paris on Friday evening that left 129 people dead. But investigators remain unsure of any family connection.

Born in Clichy-la-Garenne in the Hauts-de-Seine on the outskirts of France on August 12th, 1989, of Moroccan parents who had come to France in 1973, Aitboulahcen was young when her parents separated.

She was reportedly brought up by her mother in the Paris region, but spent time with foster parents and regularly visited her father after he moved to a housing estate in Creutzwald, east of Metz on the French-German border, where she studied.

Although her father still has an apartment in the town, he has been in Morocco for the past six months, said the local mayor.

Neighbours in Creutzwald said they had not seen Aitboulahcen for at least five years but said back then she was “extrovert”, “bubbly” and a “bit lost”. She liked to wear a large hat, leading to her nickname “the cowgirl”.

“She . . . drank alcohol,” one of her young neighbours at the Impasse du Dauphin told the local newspaper Le Republicain Lorrain. “We saw her quite often and we called her the cowgirl because she always wore a large hat.”

Another neighbour in Paris said she was a “tomboy” who dressed in jeans, trainers and a black hat until she began wearing a niqab eight months ago.

Her brother, who said he hadn’t spoken to his sister for five years, told the Daily Mail their relationship was “complicated”.

He said: “’She spent her time criticising everything. She refused to accept any advice, she didn’t want to sort herself out. She was living in her own world. She was not interested in studying her religion. I never saw her open the Koran. She was permanently on her phone, looking at Facebook or WhatsApp.”

“I told her to stop all of this but she would not listen, she ignored my numerous attempts to give her advice telling me I was not her dad, or her husband, and so I should leave her alone.”

In May 2013, she was registered as having founded a building company called Beko Construction, a business that has been inactive for two years, according to official records.

In recent years, Aitboulahcen had made no secret of her support for Islamic State on social media networks. Aware of her relationship with Abaaoud, immediately identified as the man behind the Friday 13th attacks, French intelligence service put her under immediate surveillance.

Her phone was already being tapped and bank movements traced as part of an investigation into drug trafficking in the area. After the Paris attacks, further phone taps were authorised. It was information gleaned from this surveillance that led police investigating the attacks to the apartment on the third floor of number 8 rue du Corbillon in the Saint Denis suburb of the French capital, where another alleged terror cell was holed up.

Suspecting the cell was planning a further attack on the city, French special anti-terrorist forces arrived to neutralise the group at 4.20am on Wednesday.

After heavy gunfire and a brief exchange with police, during which officers shouted to Aitboulahcen “where’s your friend?” And she replied: “It’s not my friend”, there was heavy gunfire followed by a large explosion.

Another neighbour, Christian (20) reported hearing a blonde woman he believed was Aitboulahcen shouting “help me! Help me! Help me!” and police ordering her to raise her hands before hearing a burst of gunfire.

It was unclear whether Aiboulahcen had detonated her suicide vest or whether the fire from French snipers outside the apartment had set it off.

Her contact with the terror cell was of little surprise to those who had been following her. On June 11th, Aitboulahcen, who studied at the Paul Verlaine University in Metz, posted on her Facebook page a photograph of herself in a headscarf and long robe making V signs with her hands to the cameras.

She had also expressed her admiration for Hayat Boumeddiene, the widow of Amedy Coulibaly, who carried out the attack on the the Hyper Casher supermarket in Paris three days after the Charlie Hebdo attack in January, killing four people.

BFMTV said she was “obsessed by jihad”, but had never made it to either Syria or Iraq.