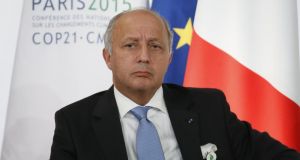 Palestine made two more steps in its slow, inexorable march towards internationally recognised statehood on Thursday.

French prime minister Manuel Valls received his Palestinian counterpart Rami Hamdallah for a bilateral “seminar”, which was a Franco-Palestinian summit in all but name.

Mr Hamdallah was greeted by the Republican Guard in full regalia. “The only thing missing is formal recognition,” said a Palestinian observer. “He’s received like a head of government, with our flag.”

Hours later, a vote in New York authorised the Palestinians to raise their flag outside UN headquarters when the General Assembly opens later this month. The resolution was adopted with 119 votes for, eight against and 45 abstentions. As promised by Mr Valls, France voted in favour. The US and Israel voted against. Britain and Germany abstained.

President Mahmoud Abbas will call on French president Francois Hollande and other European leaders on his way to the General Assembly, to consolidate support for Franco-Palestinian efforts to restart the so-called peace process, which dead-ended under US secretary of state John Kerry last year.

Mr Kerry was pilloried when he suggested Israel’s failure to carry out a promised prisoner release and Israel’s announcement it was building 700 more housing units for settlers in East Jerusalem were responsible for the breakdown of negotiations.

The French and Palestinians hope to receive UN approval for the GIS at the General Assembly. It’s not much, but it’s the only thing on the table.

When the French parliament recognised Palestine late last year, a move that carries less weight than government recognition, Mr Fabius said he would field a UN Security Council resolution that would establish a two-year deadline for negotiations leading to the establishment of a Palestinian state.

Mr Fabius promised on November 28th last: “If these efforts fail, France will have to assume her responsibilities by recognising the state of Palestine without delay.”

Mr Fabius has not put forward his resolution, and the French government has not recognised Palestine. The French do not want to risk a US veto in the security council.

Palestinians still hope for a “French resolution”, but observers are sceptical. “If the US voted against Palestinians raising their flag, they’re certainly not going to vote to give them a state,” said Michel Bounajem, a columnist for the Arab newspaper Asharq al-Awsat.

Other countries would follow. It would send a clear message to Israel that the occupation cannot last forever, that the establishment of a Palestinian state is inevitable.

“Everyone always talks about the ‘two-state solution,’ ” the same official says. “But there’s one state that has existed since 1948, and another state that is missing, under military occupation since 1967.”

At his press conference with Mr Hamdallah, Mr Valls seemed eager to make up for the failure of Paris to present a security council resolution or unilaterally recognise Palestine.

Mr Valls repeatedly listed the courageous steps taken by France in three votes: for “nonmember observer” status for Palestine at the UN in 2012, for Palestine to be a full member of Unesco, and to raise Palestine’s flag at UN headquarters.