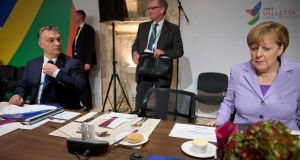 Hungary is poised to take legal action against a European Union plan to distribute refugees among member states, as opposition to the German-led quota scheme hardens across central Europe since the Paris attacks.

Parliament in Budapest voted yesterday to file a case next month with the European Court of Justice to prevent implementation of a plan Hungary and its neighbours have called unfair and unworkable.

“Most of Europe’s population doesn’t agree with the quota; its social legitimacy is lacking,” said Hungary’s justice minister, Laszlo Trocsanyi, who backed a Bill that claims the refugee plan “ignores the [EU’s] principle of subsidiarity and fails to grant national parliaments the opportunity to express their opinion”.

The scheme was pushed through at an EU summit in September, despite the opposition of Hungary, Slovakia, Romania and the Czech Republic.

Advocates see it as a blueprint for how the EU might deal with the continent’s worst refugee crisis since the second World War, despite making provision for only 160,000 of more than 800,000 migrants who reached Europe so far this year.

Hungary has led criticism of the plan, with prime minister Viktor Orban calling it a “mad and unfair” way to tackle a crisis he has called “a German problem”, because the majority of migrants want to go to Germany. After Friday’s attacks in Paris, Mr Orban lambasted the EU for letting in migrants “without control, without identification, without knowing who they are, whether they have carried arms, killed people, been members of terrorist organisations . . . without knowing anything at all.”

The anti-quota camp gained an influential member this week when a populist new government took power in Poland and its ministers denounced the quota plan. “We have to be aware that we were wrong, too naive and idealistic . . . We should be guided by doctrines not of cultural equality, nor sheer economy. There is a safety criterion that should dominate,” said new foreign minister Witold Waszczykowski.

New interior minister Mariusz Blaszczak railed against “German arrogance”, telling Polish television: “We are in Warsaw, which was destroyed by German agents” during the second World War.

Slovakia’s prime minister, Robert Fico, said: “We have been saying that there are enormous security risks linked to migration. Hopefully, some people will open their eyes now [after Paris]”.

Bulgaria also came out against a plan it reluctantly supported before the Paris attacks. “This isn’t the way to solve the problem and to approach it,” said foreign minister Daniel Mitov. “Discussing quotas at this point has become absurd.”