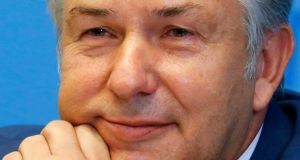 Berlin’s Social Democrat (SPD) mayor Klaus Wowereit announced his departure from office yesterday, leaving office after 13 years with his reputation tainted by a long-running disaster over the city’s new airport.

A polarising figure for many Berliners, Mr Wowereit took office in 2001 as Germany’s first openly gay politician. On his watch, Berlin grew into its role as federal capital increasingly on the map of world leaders and tourists.

“It’s not easy to find the right moment to go but I’ve chosen to go of my own accord,” said Mr Wowereit (60) yesterday announcing his departure in December.

His departure was hastened by snowballing political problems, plunging popularity and ambitious younger SPD colleagues. As head of Berlin’s Senat, or state government, the mayor ruled first with the post-communist PDS, now known as the Left Party, then the centre-right Christian Democratic Union (CDU).

He shot to national fame in June 2001, pre-empting a tabloid’s plan to out him as homosexual by telling party colleagues at his own nomination conference as mayoral candidate: “I’m gay and that’s a good thing.”

“Wowi” was loved by his supporters who saw him as the quick-witted, down-to-earth local boy made good.

To the outside world he was Berlin’s chief ambassador, riding a decade-long wave of Berlin hype that has attracted a new creative class and record numbers of tourists – two crucial pillars of income in a city with little industry.

But his critics accused him of being a “party mayor” and political opportunist, quick to claim others’ successes as his own and nowhere to be seen when problems emerged.

There was nowhere for him to hide in June 2012, when Berlin’s new international airport missed its planned opening date. What began as a scandal over the airport ventilation system, not built to plans and unfit for purpose, has ballooned into a world-class case study in incompetence and mismanagement. As costs passed €5 billion Mr Wowereit, head of the airport supervisory board, accepted no political responsibility for the affair.

Yesterday, still unable to say when the airport will open, he admitted he was “disappointed” by the airport affair