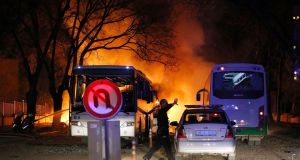 A police officer at the site of the explosion on February 17th, 2016 in Ankara, Turkey. Photograph: AFP/StringerCihan News Agency/Getty Images

Turkish authorities have arrested nine suspects over the bombing in Ankara that killed at least 28 people, as prime minister Ahmet Davutoglu said Kurdish militants were to blame.

Mr Davutoglu confirmed press reports that the man who detonated the car bomb that targeted buses carrying military personnel on Wednesday was a Syrian national who had been identified from his fingerprints.

He pledged that Turkey would hit back at the outlawed Kurdistan Workers’ Party, or PKK.

Dozens more people were wounded by the explosion which occurred during evening rush hour in the heart of the Turkish capital, in an area close to parliament and armed forces headquarters and lodgings.

Mr Davutoglu said Turkey’s Kurdish rebels collaborated with the Syrian man to carry out the bombing.

“The attack was carried out by the PKK together with a person who sneaked into Turkey from Syria,” he said.

Turkey’s military said later that its jets had hit Kurdish rebel positions across the border in northern Iraq.

The military said the planes struck the region of Haftanin on Wednesday night, targeting a group of 60-70 PKK rebels including a number of senior leaders.

Turkey’s air force has been striking PKK positions in northern Iraq since a fragile peace process collapsed in July.

1 Why Sinn Féin will not call the State by its name
2 Europe grapples to rein in global spread of coronavirus
3 Irish health officials to ramp up precautions against coronavirus
4 McDonald rejects idea SF public meetings ‘an affront to democracy’
5 Coronavirus: Irish citizens advised not to travel to Italy’s affected areas
Real news has value SUBSCRIBE