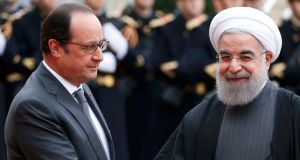 France and Iran “opened a new chapter in our relations” during President Hassan Rouhani’s two-day visit to the French capital, President François Hollande said at their closing press conference. “I want this relationship to be useful to our two countries, to the region, to the world.”

Some 30 agreements were signed yesterday between governments and between companies, Mr Hollande said. The French export bank Coface agreed to guarantee French investments in Iran.

The French leader described a veritable bonanza: deals in agriculture, health, industry, telecommunications, aeronautics, sustainable development, transport. There were so many, he said, that he could not remember them all.

Some French companies, like Total and car manufacturer PSA Peugeot Citroën, traded with Iran before international sanctions forced them to stop. Total is resuming purchases of Iranian petroleum, while PSA will invest €400 million in a venture with Iran Khodro to modernise a car factory near Tehran.

The half-century-old relationship between Peugeot and Iran Khodro was a symbol of Franco-Iranian relations, with all their ups and downs, prime minister Manuel Valls said. Airbus will sell up to 127 aircraft to Iran Air. Alstom will build metro lines while Bouygues and Aeroports de Paris are negotiating to build the second terminal at Imam Khomeini airport.

However 37 years of mutual distrust could not be erased in an instant. Mr Hollande looked embarrassed when Mr Rouhani thanked France for having harboured Ayatollah Ruhollah Khomeini.

In a lecture to the French Institute for International Relations, Mr Rouhani chided Europe for abandoning the Palestinians, and for over-reacting to the arrival of what he called “100,000-200,000 migrants,” when Iran had welcomed three million Afghans.

Media and human rights groups criticised Iran’s record. “Welcome Rouhani, executioner of freedom,” said a banner painted in red, hung from a footbridge over the Seine.

A member of the radical feminist group Femen dangled from the bridge in a mock hanging, wearing only flesh-coloured panties and an Iranian flag on her chest. “We wanted Rouhani to feel at home,” Femen leader Inna Shevchenko tweeted.

“In 2015, more than 1,000 people were executed in Iran,” said Karim Lahidji, president of the International Federation of Human Rights. “Iran has the second-highest number of journalists in prison, after China.”

Asked about Iran’s rights record, Mr Rouhani said: “The West must not claim they are in conformity regarding human rights and others are not. There are failings in every country.”

Mr Rouhani said the spirit of compromise shown by both sides in the nuclear negotiations – which two weeks ago resulted in the lifting of sanctions – could be a model for resolving conflicts in the Middle East.

“Your question is strange,” Mr Rouhani told a French journalist who asked him if the Islamic Republic would compromise on the future of Syrian president Bashar al-Assad.

“It is the Syrian people who must take decisions for their country. Clearly people who are elected must be accepted by all Syrians. It’s not a question of persons. It’s a question of terrorism, of Da’esh [Islamic State, also known as Isis].”

Regarding the proxy wars between Iran and Saudi Arabia, and the recent rupture in their diplomatic relations, Mr Hollande said: “We must do everything to calm things down, to de-escalate, to return to a form of stability.”

Mr Rouhani said he wanted differences with Saudi Arabia to be resolved diplomatically, but he repeatedly criticised the kingdom. “What was the source of [Islamic State’s] ideology?” he asked in his lecture, alluding to Saudi Arabia.

Riyadh bore primary responsibility for the vertiginous fall in oil prices, he added.