Montenegro in limbo amid leader’s resignation and ‘coup’ furore 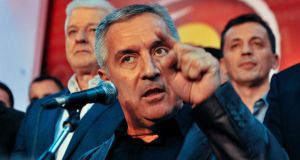 Milo Djukanovic, who stepped down as Montenegro’s prime minister amid speculation over a supposed plan to seize parliament and detain him. Photograph: Savo Prelevic/AFP/Getty Images

Opposition parties in Montenegro have urged officials not to recognise the results of this month’s parliamentary election, which were marred by accusations of fraud and an alleged coup plot in which some see the hand of Russia.

The tiny Balkan state slipped into political limbo after the October 16th vote gave no party a majority and prompted prime minister Milo Djukanovic to step down, amid speculation over a supposed plan to seize parliament and detain him.

Security services in both Montenegro and neighbouring Serbia have arrested people involved in the alleged election-day plot, which Mr Djukanovic said showed the “strong involvement of foreign factors”, without giving details.

Serbian newspaper Danas cited unnamed “sources close to the government” in Belgrade saying that several Russians had been deported from the country after being detained in connection with the conspiracy.

Officials in Serbia did not confirm the report, which appeared as Nikolai Patrushev – a close ally of Russian president Vladimir Putin and secretary of the country’s security council – paid a visit to Belgrade on Wednesday.

Opposition parties claim Mr Djukanovic’s allies announced the arrests of the supposed plotters to sow panic, to encourage people not to go and vote, and to whip up fears of Russian interference in Montenegro.

Pro-EU and pro-Moscow opposition parties agree on the need to hold a referendum on whether Montenegro should join Nato – a move that Mr Djukanovic’s Democratic Party of Socialists (DPS) insists should be decided by parliament.

The opposition wants the vote to be re-run due to the impact of the coup claim on election day, and what it alleges were other major irregularities.

In an open letter, four major opposition groups called on Montenegro’s election commission not to officially confirm the results of the vote due to continuing confusion and dispute over the alleged coup plot.

They also called on small parties representing Montenegro’s ethnic minorities – with which the DPS hopes to forge a majority in parliament – to join their protest and help make the country “a stable place in which elections do not take place under the threat of destruction of the state and constitutional order”.

Pro-western opposition leader Nebojsa Medojevic wrote on Twitter: “With the fake coup on election day, Djukanovic has done what many opposition leaders failed to do in 27 years – he has united the opposition.”

That is how long Mr Djukanovic has ruled as president and prime minister, except for two short periods when he relinquished office while remaining the country’s most influential figure.

The DPS has announced that he will not continue as premier, and a close ally has been nominated to succeed him should the party forge a ruling coalition.

Bodo Weber, a Balkans expert at the Democratisation Policy Council in Berlin, said that process might be simplified by the resignation of Mr Djukanovic, who has long denied persistent allegations of corruption.

“It would be rational to try to take one or two smaller parties from the opposition, and that would be easier without [Djukanovic]