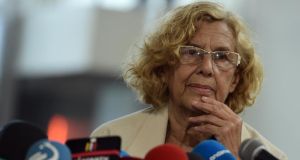 Manuela Carmena, the retired judge who last month took Madrid’s municipal election by storm and is expected to be confirmed as the city’s mayor today. Photograph: Gerard Julien/AFP/Getty Images

She looked like just any other woman in her 70s, reading a book on the Madrid subway. But a closer look at the photograph showed it was indeed Manuela Carmena, the retired judge who last month took Madrid’s municipal election by storm and is set to be confirmed as the city’s mayor today.

The photo published in newspapers of Carmena on the subway just days after the May 24th election was one of many sightings revealing her as an unusual politician. She is often on her bicycle and was seen recently running a kiosk at Madrid’s literary fair, where she signed copies of her book, Por qué las cosas pueden ser diferentes: reflexiones de una jueza. (“Why things can be different: reflections of a judge.”)

Carmena (71) represents Ahora Madrid, a platform that combines the resources and personnel of the left-leaning Ganemos Madrid grassroots movement with Podemos, the new party which has been Spain’s biggest political phenomenon of recent years.

A former communist, Carmena was politically active in the last years of the Franco regime. But before she agreed to run in the recent election she had been completely removed from politics, running a shop in central Madrid that sells baby clothes made by prisoners.

“I wasn’t interested,” she told El Diario newspaper of when she was first approached to be the Ahora Madrid candidate. “I thought it should be someone young.”

But she changed her mind. “You start to see that you might be needed. I was aware that I had a profile that a lot of people were looking for.”

That profile was of an older candidate who could reach out to a demographic that felt underrepresented by the youth-driven Podemos. The fact that Carmena has an amiable, consensual public manner also helps – one newspaper labelled her “the miracle granny”.

That personal style took the sting out of fierce claims by her electoral rival, Esperanza Aguirre of the conservative Popular Party (PP), that Ahora Madrid represented a radical left close to Venezuela’s “Bolivarian” style .

Carmena came second in the election, one seat behind Aguirre, whose party has controlled the Spanish capital for the past 24 years. But the PP in Madrid has become isolated by the many corruption cases tainting it, hindering its ability to gain votes from other parties.

Carmena, meanwhile, has secured the support of the Socialist Party, paving the way for her to be voted in as mayor today, barring any extraordinary developments.

Aguirre is not the only one on the right who sees the former judge as part of an unwelcome new wave of leftist politics that swept the country on May 24th, unseating the PP from many city halls and regional governments. A group of demonstrators in Madrid recently sang the Franco anthem, gave the fascist salute and called for all parties to block Carmena’s investiture.

She has made clear what her priorities will be once she takes office. Like Ada Colau, the young activist set to become mayor of Barcelona, Carmena wants to stop banks evicting impoverished families – an ongoing legacy of the economic crisis. She also wants to stem the tide of privatisation and sub-contracting of public services.

“There’s an enthusiasm similar to that of the beginning of democracy,” she told El País. “You can see the frustration of a society that has a real need for change.”