Migrants a concern for Germans and Swedes, polls reveal

Polls in both countries reveal tougher stance on foreign nationals 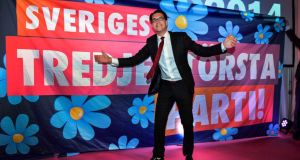 Sweden and Germany seem like the last places in Europe where populist, anti-immigration politics could take root: Sweden because of its liberal social identity, Germany because of its burdened history.

Neither country was hard-hit by the recent economic crisis yet, in both countries, taking a hard line against immigration now seems a political formula with potential. That was the lesson on Sunday evening when results in German and Swedish elections showed dramatic leaps into double digits for parties hoping to radicalise debate.

The Sweden Democrats (SD) became that country’s third-largest party, more than doubling its support to 12.9 per cent while the Alternative für Deutschland (AfD) polled 10 and 12 per cent respectively in state elections in Thuringia and Brandenburg.

The AfD was founded last year as a critic of the EU’s euro crisis solutions and narrowly missed entering the Bundestag last year. The SD, meanwhile, dates back to 1988, and evolved from far-right organisations with neo-Nazi roots and entered parliament with 5.7 per cent for the first time in 2010. Yet, for all their differences, the similarities are striking.

The AfD and SD have conservative DNA yet say old left/right definitions don’t apply to them. They are coming from different places – the SD the far-right, the AfD political obscurity – yet are determined to converge on the same point: the political mainstream. Ahead of Sunday’s poll, the SD toned down its nationalist, xenophobic rhetoric in favour of a social conservative profile.

But its headline vote-winners were to cut immigration by 90 per cent, ban “professional begging” and single out Islam as the religion “which has proven itself to have the most difficulty to harmoniously coexist” with Swedish culture. But it competed with the centre-left, too, on its core theme: a demand to reverse reforms in which schools transformed into state-funded, for-profit private entities.

Pursuing hard-right voters, it demanded referendums on mosque minarets; non-voters and older eastern voters were wooed with AfD praise for East Germany as a safer place than border regions today. Like the SD, the AfD pushed the immigration issue, warning against “people who don’t fit with our cultural development and . . . who contribute nothing to this country”. One AfD official said immigration endangered “German identity” in Thuringia – a state with a non-German quota of 1.8 per cent.

The AfD denies it is stirring up fear, insisting its critical stance on immigration addresses a voter concern mainstream parties ignore. Here the AfD overlap with the SD is greatest, given both Germany and Sweden face record immigration.

Taboo subject The reaction from mainstream politicians has been telling. Outgoing Swedish prime minister Fredrik Reinfeldt demanded a debate about

While adapting their politics quietly to the new challengers, German and Swedish political leaders still insist they will refuse to deal with them. On Monday in Stockholm, Social Democrat leader Stefan Lövfen – the likely future prime minister – promised to isolate and ignore the SD. In Berlin, the chancellor’s post-election response was classic Merkelese: “We are in agreement that the best answer to the AfD is, of course, the good work that we have to do where we are in power.”

Just to tackle the new challengers in Sweden and Germany is proving a political riddle, given post-election analysis indicated both the SD and AfD pulling in support across the political spectrum. In Sweden, some centre-right politicians have mused about reaching out to the SD to tame them.

In Germany, centrist CDU calls for a similar approach with the AfD – at least at federal state level – have been challenged by CDU conservatives demanding an all-out attack. Not challenging the AfD, they warned, would contribute to the AfD “pendulum swinging further to the right”.