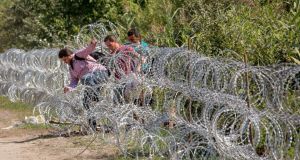 Migrants jump through the border fence from Serbia into Hungary. Critics see the fence as a costly publicity stunt. Photograph: Matt Cardy/Getty Images

Seven people died when a boat carrying migrants sank off Libya’s coast on Sunday, the second such fatal accident at sea within days, while European leaders struggled to find a coherent policy on the refugee crisis.

The Italian coastguard said that some 1,600 migrants had been rescued in the Mediterranean and brought to Italy over the weekend, showing the influx of people, mostly from Africa and the Middle East, remained strong.

At least 2,500 migrants have died making the journey since January, most of them drowning in the Mediterranean.

“We had reports this morning that there are seven bodies of illegal migrants that sank off Khoms . . . but we don’t have any details of how many migrants were on board,“ said Mohamad al-Misrati, a spokesman for the Red Crescent in Tripoli.

On Thursday, another vessel sank off the coast of the Libyan town of Zuwara, killing up to 200 people.

In Italy, which has been at the forefront of the crisis, prime minister Matteo Renzi said the rising death toll would push EU states to confront the problem.

Hungary fence Migrants are continuing to cross at will into Hungary despite the completion of a razor wire fence along its border with Serbia and safety fears that soared following the death of 71 people trapped inside a truck, apparently driven by traffickers.

Hungary’s army finished laying razor wire along the 175km frontier on Saturday, hours after three Bulgarian men and an Afghan pleaded not guilty to charges of people smuggling in connection with the truck deaths.

Hungarian police arrested a fourth Bulgarian on Sunday, as experts tried to establish the identities of the 59 men, eight women and four children found on Thursday in a truck parked on a motorway in Austria, close to its border with Hungary.

Over the weekend, three severely dehydrated children were rescued from a truck of migrants being driven through Austria by a Romanian man.

The children have since been taken from hospital by their parents to continue the journey to Germany.

People traffickers in the region are making huge profits from hundreds of thousands of people now seeking refuge in the EU from war, persecution and unremitting poverty in parts of the Middle East, Africa and south Asia.

“No problem, no problem,” said Ruben, a Bangladeshi, at Budapest’s Nyugati train station, when asked how he had crossed the fence into Hungary.

Many migrants in Hungary pay people smugglers because they are afraid to catch international buses and trains, fearing they will be removed and registered by police and sent back to the EU state in which they first arrived.

Critics demand the annulment of this rule, part of the so-called Dublin regulation; they also want migrants to be allowed to use public transport, and they see Hungarian premier Victor Orban’s border fence as a costly publicity stunt.

“It’s ridiculous,” said Mark Kekesi, a psychology professor who works with the Migrant Solidarity group in Szeged, 15km from the Serbian border.

“Anyone can crawl under or over the fence in a couple of minutes. It is very expensive and will never stop anything. But this is a political statement - Orban wants to project the idea that he is protecting Hungary and Europe from ‘invaders’.”

On several days last week, between 2,000 and 3,500 migrants entered Hungary despite the fence being nearly complete - ramping up pressure on border and police forces, and on Mr Orban from vocal far-right groups that demand tougher action.

“Migrant numbers are not dropping at all and it’s making Orban look ridiculous,” said Mr Kekesi, at Migrant Solidarity’s help point in Szeged.

An additional steel border fence is now being erected, and more than 2,100 police officers and cadets will form fast-reaction “hunting” units, equipped with four-wheel-drives, helicopters and dogs, to respond to incidents.

Hungary’s parliament is expected to debate the deployment of soldiers to the border.

“They are extremely harsh. Hungary is part of Europe, which has values and we do not respect those values by putting up fences,” he said.

“Hungary is not respecting Europe’s common values so the European authorities need to have a serious discussion, even a stern discussion with its officials.”

Britain’s home secretary, Theresa May, meanwhile, said the failings of a “broken European migration system” were exacerbated by passport-free travel through much of the bloc - a system that does not include Britain and Ireland.

Germany, France and Britain yesterday made a joint call for an urgent meeting of EU interior and justice ministers in the next two weeks to take “immediate action” and agree on “concrete steps”.

In Szeged, Mr Kekesi said police numbers had already “dramatically increased” in the border region, but showed no sign of deterring the migrants.

“I met a Syrian engineer last week, about 60-years-old, well-educated, and he told me: ‘At home I would be dead already, so I have nothing to lose’,” Mr Kekesi recalled.

“No fence will stop people who feel that way.”