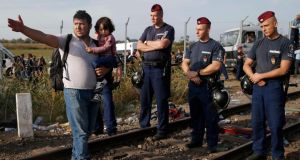 A migrant with his child talks to police officers after Hungarian police sealed the border with Serbia near the village of Horgos, Serbia. Photograph: Marko Djurica

Two decades of frontier-free travel across Europe unravelled on Monday as countries re-established border controls in the face of an unprecedented influx of migrants, which broke the record for the most arrivals by land in a single day.

Germany’s surprise decision to restore border controls on Sunday had a swift domino effect, prompting neighbours to impose checks at their own frontiers as thousands of refugees pressed north and west across the continent while European Union ministers argued in Brussels over how to share the burden.

Austria said it would dispatch its military to help the police carry out checks at the border with Hungary after thousands of migrants crossed on foot overnight, filling up emergency accommodation nearby, including tents at the frontier.

Thousands more raced across the Balkans to enter Hungary before new rules take effect on Tuesday, which Budapest’s right-wing government says will bring a halt to the illegal flow of migrants across its territory.

By 3pm Irish time on Monday, police said 7,437 migrants had been recorded entering Hungary from Serbia, beating the previous day’s record of 5,809.

Then a line of Hungarian police in helmets blocked off the main informal crossing point. Backed by mounted police and soldiers with a helicopter circling overhead, dozens of officers took up positions on a railway track used by migrants to enter the EU’s Schengen zone of border-free travel.

Slovakia said it would now impose controls on its borders with Hungary and Austria. The Netherlands announced it would make spot checks at its borders. Other EU countries, ranging from Sweden to Poland, said they were monitoring the situation to decide whether controls were needed.

European justice and home affairs ministers are meeting in Brussels to discuss the crisis amid increasing signs that the refugee quota system under consideration will not be mandatory.

Minister for Justice Frances Fitzgerald has called on all EU member states to show solidarity in the face of the crisis.

Arriving in Brussels for the meeting, Ms Fitzgerald said she expects political agreement to be reached today on the EU’s relocation plan to accept 120,000 refugees, announced by European Commission president Jean-Claude Juncker last week, but that details on the exact numbers may be worked out at a later stage.

“I certainly hope that we come to an agreement. That’s certainly the intention, but clearly member states are in very different situations... we’ll wait and see. The migrant issue is a huge humanitarian challenge. We have to show solidarity in dealing with it.”

A meeting of EU ambassadors this morning failed to bridge divisions between member states, with a number of east European countries continuing to resist the idea of mandatory quotas that forms the cornerstone of the Juncker plan.

A document circulating before the meeting showed the council was proposing a “voluntary” rather than mandatory system, an outcome that would be a major set-back for the European Commission’s plan to establish a mandatory distribution scheme in the European Union.

Last week the European Commission unveiled a plan to redistribute 120,000 Syrian, Eritrean and Iraqi refugees across the European Union, in addition to 40,000 people targeted under a previous plan.

But a number of east European countries, including Hungary, the Czech Republic, and Slovakia are strongly opposed to the notion of mandatory quotas, arguing that immigration should be a matter of national sovereignty.

Speaking this lunchtime, a spokeswoman for the European Commission said that while a mandatory system was preferable, “if the objectives are achieved, then that is the most important thing.”

A number of member states, particularly Germany, have committed to accepting far in excess of the numbers envisaged under the 120,000 relocation scheme, while most member states are expected to voluntarily partake in the scheme.

Arriving at the meeting, Robert Kalinak, the Slovak interior minister, expressed his opposition to quotas. “This proposal is not solving the problem,” he said.

Arriving at today’s meeting, Finland’s interior minister Petteri Orpo said his country stands ready to reintroduce border controls, though this was not necessary at this point.

But the European Commission has played down the decision by countries to reintroduce border controls, which effectively suspends the operation of Schengen.

The EU’s executive arm has insisted that current Schengen rules permit countries to reintroduce temporary border controls due to unforeseen circumstances. Under EU law, Germany can impose border controls for 10 days, which can be extended by 2 weeks up to a maximum of 6 months.