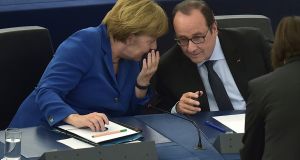 In a speech to the European Parliament, Ms Merkel also backed a new EU system to share the burden of accommodating the hundreds of thousands of migrants arriving on the continent, declaring that the existing “Dublin” rules had failed.

The crisis has created deep divisions in the EU, and a number of eastern European member states had refused to accept a system under which asylum seekers are supposed to be spread across the bloc according to compulsory quotas.

“In the refugee crisis we must not succumb to the temptation of falling back into acting in nationalistic terms,” said Ms Merkel, standing next to French president Francois Hollande.

“National solo efforts are no solution to the refugee crisis.”

Under the Dublin regime, migrants are supposed to seek asylum in the first EU country they arrive in, but over the summer most have refused to register in countries such as Greece.

Instead, they have headed overland to wealthier member states to the north, mainly Germany and Sweden, believing that life will be better there.

“Let’s be honest, the Dublin procedure in its current form is obsolete in practice,” Ms Merkel said.

“The bottom line is that it didn’t prove to be sustainable in the face of the challenges on our borders.”

“Due to that I am supporting the agreement of a new approach of a fair and joint burden sharing,” the German chancellor said.

Germany expects at least 800,000 asylum seekers to arrive this year. The interior ministry said on Wednesday that it had received 43,071 applications for asylum in September, a 126 per cent rise compared with the same month last year.

An EU summit last month agreed to start a process of relocating Syrians and others likely to win refugee status across member states and deporting those regarded as economic migrants.

That is a demand of Germany and France but also of ex-communist states such as Hungary, the Czech Republic and Slovakia, who had resisted quotas that would force them to take a share of asylum seekers but were over-ruled in a rare ministerial vote in September.

The EU said it hopes to begin intercepting people-smugglers in the southern Mediterranean on Wednesday, nearly six months after first pledging to target the Libyan smuggling industry.

According to the EU’s foreign policy chief, Federica Mogherini, a combined EU naval mission known as EU Navfor Med will now be able “to board, search and seize vessels in international waters, [after which] suspected smugglers and traffickers will be transferred to the Italian judicial authorities”.

The move comes as the smuggling season begins to ebb, four months after the primary migration route to Europe switched from Libya to Turkey, and five-and-a-half-months after EU heads of state, including David Cameron, promised to target Libyan smugglers .

EU officials have been vague about how their plan will be put into action, with a spokesman for the operation, dubbed “Operation Sophia”, repeatedly avoiding direct questions on the subject.

With no mandate from either the UN or the Libyan government, EU Navfor Med can only operate within international waters, raising questions about how it will be able to target smugglers who largely operate within Libya’s maritime borders.

Smugglers are said to cram migrants into rubber boats in Libyan waters, before sending the majority into international waters on their own.

Only a minority of boats, usually wooden fishing vessels, are accompanied by members of a smuggling network.

Smuggling missions are already intercepted by rescue teams including EU Navfor Med, leading to confusion about whether the new developments will constitute any significant change.

The operation’s spokesman acknowledged that boats laden with migrants will be handled just as they have been all year - with the passengers disembarked in Italy, and their smugglers presented to Italian policemen on arrival.

The substantive change to the operation could come after the passengers are disembarked, when separate teams of smugglers dart into international waters to retrieve the abandoned fishing vessels and tow them back to Libya, ready to be reused in subsequent smuggling missions.

However, even within the limits of its current mandate, the EU Navfor Med boats could pursue and seize smugglers who attempt to do this.

The operation’s spokesman said: “We are open 360 degrees to whatever is happening over there in international waters. So we are flexible.

“We can manage any situation - migrants alone, smugglers and migrants, or smugglers in their own boat.”

Libyan smugglers have acknowledged that the re-use of abandoned smuggling boats is a part of their business model.

One smuggler said the same boat had been used four times after being abandoned at sea following the rescue of its passengers by European coastguards.

The smuggler also pointed out that any limits to the availability of wooden fishing boats would mean that smugglers simply use more inflatable boats instead.

These are easily imported, and so do not need to be retrieved once they are abandoned in international waters.

Sitting low in the water, and often with just one air-pocket, they are even more dangerous than the wooden boats - and their increased use could lead to more deaths.

The full effects of the EU’s strategy may not be seen until May or June 2016, as the smuggling season winds down for the winter.

The mission will have no impact in the Aegean sea between Turkey and Greece - the stretch of water used by the vast majority of refugees attempting to reach Europe.