Ninety people have been rescued and three migrants have drowned after a wooden sailboat ran aground off the Greek island of Rhodes. Video: Reuters

Illegal migrants arrving at Zefyros beach on Rhodes in Greece on Monday. A ship with 200 people on board run aground at Rhodes central beach Zefyros. Most of the migrants fell into the water and managed to swim safely to the beach with the assistance of the locals. The ship run aground on rocks. The bodies of a man, a woman and a child were recovered during a rescue operation. Photograph: Loukas Mastis/EPA

Hundreds of people participate in a silent ceremony in Vienna, Austria, on Monday to pay their respects to migrants who died when their vessel capsized in the Mediterranean at the weekend. Photograph: Joe Klamar/AFP/Getty Images

Left to right are French foreign minister Laurent Fabius, Spanish minister of interior Jorge Fernandez Diaz and EU Commissioner of Migration and Home Affairs Dimitris Avramopoulos at the start of a joint session of Foreign and Interior Ministers on Migration issues at EU headquarters in Luxembourg, April 20th, 2015. Top topic was the plight of migrants following the Mediterranean tragedy in which as many as 900 people were drowned at the weekend. Photograph: Julien Warnand/EPA

The European Union has proposed doubling the size of its Mediterranean search and rescue operations on Monday, as the first bodies were brought ashore after what could be as many as 900 people were killed in a shipwreck while trying to reach Europe.

Three other rescue operations were under way on Monday to save hundreds more migrants in peril on overloaded vessels making the journey from the north coast of Africa to Europe.

The mass deaths have caused shock in Europe, where a decision to scale back naval operations last year seems to have increased the risks for migrants without reducing their numbers.

“The situation in the Mediterranean is dramatic. It cannot continue like this,” European Council president Donald Tusk said, calling an extraordinary summit of EU leaders for Thursday to plan how to stop human traffickers and boost rescue efforts.

Malta’s prime minister Joseph Muscat said as many as 900 people may have died in Sunday’s disaster off the coast of Libya when a large boat capsized.

That would be the highest death toll in modern times among migrants, who are trafficked in the tens of thousands in rickety vessels across the Mediterranean.

In Vienna, more than 3,000 people including President Heinz Fischer gathered at a memorial service for the dead. The demonstrators put candles on an inflatable raft in their memory.

EU ministers held a moment of silence at a meeting to discuss the crisis in Luxembourg.

The bloc’s executive, the European Commission, presented a 10-point plan to address the crisis, which would include doubling the size and the funding of Triton, an EU naval operation in the Mediterranean.

But even that would leave the operation smaller and less well-funded than an Italian mission abandoned last year due to costs and domestic opposition to sea rescues that could attract more migrants.

Italy and Malta were working to rescue the occupants of another two migrant boats carrying about 400 people off the coast of Libya on Monday. 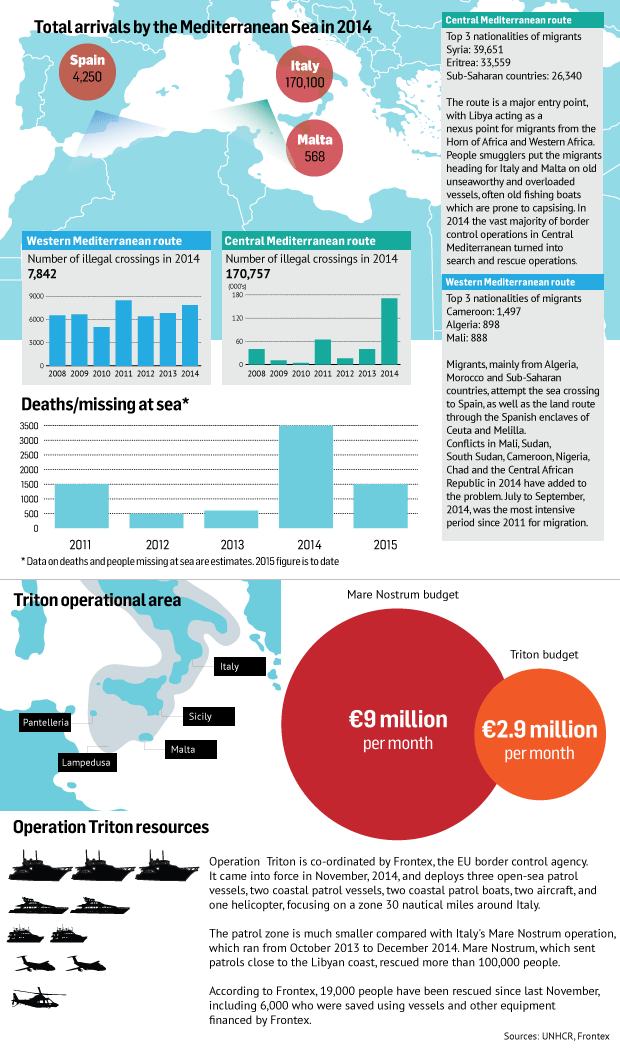 Hundreds of kilometres to the east, coast guards were struggling to save scores of migrants from another vessel destroyed after running aground off the Greek island of Rhodes.

Greek coast guards said at least three people were killed there. Television pictures showed survivors clinging to floating debris while rescuers pulled them from the waves.

Italy’s prime minister Matteo Renzi compared the smuggling of migrants across the Mediterranean to the African slave trade of centuries ago. “When we say we are in the presence of slavery we are not using the word just for effect,” he said.

European officials are struggling to come up with a policy to respond more humanely to an exodus of migrants travelling by sea from Africa and Asia to Europe, without worsening the crisis by encouraging more to leave.

“Search and rescue alone is not a silver bullet,” said German interior minister Thomas de Maiziere. “If you just organise search and rescue, criminals who get the refugees on board will send more boats.”

German chancellor Angela Merkel said that alongside efforts to fight trafficking, more should be done to save those at sea: “We will do everything to prevent further victims from perishing in the most agonising way on our doorstep.”

The vessel overturned and sank off the coast of Libya on Sunday when passengers rushed to one side to attract attention from a passing merchant ship.

A Bangladeshi survivor told police there had been 950 passengers onboard, many of them locked into the hold and lower deck, according to the International Organisation for Migration.

Officials cautioned the figure was an informal estimate.

In the Maltese capital, Valletta, coast guard officers brought ashore 24 corpses found so far. Wearing white protective suits, they carried the victims in body-bags off the Italian ship Gregoretti and deposited them in hearses as survivors looked on from the deck.

Twenty-eight survivors rescued so far were to be taken on the same boat to the Sicilian port of Catania.

In Greece, more than 90 people were rescued from the boat wrecked off the coast of Rhodes: “We have recovered three bodies so far - that of a man, a woman and a child,” a coast guard official said.

Among those calling for more compassion from Europe were the United Nations human rights chief and Pope Francis.

“This is a humanitarian emergency that involves us all,” the IOM’s Italy director Federico Soda said, calling for a mission equivalent to the Italian operation to be relaunched immediately.

If the toll is confirmed in Sunday’s tragedy, as many as 1,800 migrants will have died so far trying to cross the Mediterranean since the start of this year. The IOM estimates around 21,000 made the voyage successfully.

The number of migrants normally surges in the summer, meaning far greater numbers are likely to attempt the voyage in coming months. In total last year 174,000 made the journey successfully and around 3,200 died.

The IOM says hundreds of thousands of people could be planning to attempt the crossing from Libya, now in a lawless state with two competing governments at war with each other and incapable of policing people-smuggling gangs.

Mr Renzi said a military operation in Libya was not on the table, while Mr Muscat said the United Nations should mandate a force to fight people-traffickers in Libya.

Last week about 400 migrants were reported to have died attempting to reach Italy from Libya when their boat capsized.

Northern EU countries have so far largely left rescue operations to southern states such as Italy.

According to the IOM, Italian coast guards, navy and commercial ships had rescued 10,000 migrants in the Mediterranean in the past few days.

7:01 Who pays if you suffer side-effects from Covid-19 vaccine?