German sentiment has changed drastically in a year. Since the chancellor tried to alleviate the crisis of fleeing Syrians by letting them in, an Islamophobia has taken hold 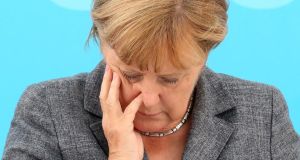 The birds start to sing when Angela Merkel walks into the room. After a restless summer holiday the German chancellor is back at work, but up close she looks just as tired as before as she strolls through the Centre for Renewable Energy, accompanied by recorded birdsong.

We’re at a political meeting for Merkel’s Christian Democratic Union, or CDU, in Neustrelitz, 90 minutes north of Berlin, in the eastern German state of Mecklenburg-Vorpommern. This is where Merkel has her constituency and where, two weeks from now, voters elect a new state parliament. It is also exactly a year since Merkel, facing a refugee wave of unprecedented proportions, uttered her now infamous words of encouragement: “We can manage this.”

A year on it’s fair to say that, while its EU neighbours, including Ireland, looked the other way, Germany managed a remarkable feat by putting a roof over the heads of more than a million people. But Germans are looking at Merkel again and asking, What now?

The “refugees welcome” mood has been cooling rapidly since gangs of young men, almost all immigrants and including some asylum seekers, harassed, groped and in some cases raped hundreds, if not thousands, of young women in Cologne and other German cities on New Year’s Eve.

Then last month Merkel had to interrupt her holidays, twice, after four violent attacks in southern Germany claimed 15 lives. Two had links to Islamic State; the links were strong enough to crystallise slumbering fears that opening its doors to refugees had opened Germany to Islamist terror attacks. As Merkel warms up to run for a fourth term next year she’s facing a chillier wind than ever.

In her characteristically stilted German Merkel says it’s clear that extremist groups are trying to recruit refugees and have smuggled in extremists disguised as refugees. “But the phenomenon of Islamist terrorism, Isis, is not a phenomenon that came to us with the refugees but which we had before,“ she says, citing the large number of native German jihadists. With those words of cold comfort the debate is over, her audience is let loose on the buffet, and Merkel floats out of the building.

Back outside the CDU bubble, however, the mere mention of Merkel’s name unleashes a violent reaction in Neustrelitz.

In a nearby cafe a 76-year-old named Karl Kraus is talking himself into a state, hopping from Islam’s plan for world domination to how neither Native Americans nor “the slaves” have integrated successfully into US society.

“The chancellor has an obligation to protect the people from harm, but my greatest fear is that we have a leader who knows nothing about that,” Kraus says. “Merkel’s politics condone the kind of insecurity that can end in terrorist attacks.”

After last month’s attacks many Germans are asking themselves whether the worst is yet to come and why Merkel, starting on the weekend of September 5th-6th, allowed thousands of people to come, uncontrolled and unregistered, into Germany.

Her officials say today that the decision was the lesser of two evils, to avoid a bigger catastrophe if streams of people on the march from Budapest reached the borders of Austria and Germany and were refused entry. “In a particular moment, the chancellor said, based on our history, Germany will take the right step and live up to our humanitarian obligation,” Aydan Özoguz, minister of state for integration, says.

But what was supposed to be a one-off exception, to allow in 20,000 Syrians stuck in Hungary, soon became the rule. The following weekend alone 20,000 people arrived at Munich’s central station. For weeks, months, Germany doesn’t know who has arrived or from where.

Although Merkel insists that the refugee crisis has nothing to do with Islamist terror a Berlin political scientist, Oskar Niedermayer, says that many Germans have already linked the two in their minds. “That most politicians say the opposite doesn’t change that,” he says. “Trying to block out this topic will only go badly wrong.”

Wrong for the CDU is right for the Alternative für Deutschland, or AfD. In Mecklenburg-Vorpommern the far-right AfD is poised to enter its ninth state parliament, with 20 per cent support in polls. Two weeks later, in Berlin’s state elections, it could take about 12 per cent. A year from now the Bundestag beckons.

Within Merkel’s CDU there are grumblings of dissent, but no one is prepared to tackle the chancellor head on. Only former rivals, such as Roland Koch, once a leading light in the party, dare do that. Merkel’s “we can manage this” maxim, he says, missed the wood for the trees.

“The question now is, Do we want this? And large sections of the European and German population don’t want this, a fact that many politicians underestimated.”

In hindsight, Merkel officials say, the weak spot of their refugee strategy last year was the assumption that EU leaders would back Berlin and agree a burden-sharing refugee deal.

A year on, in a renovated barn outside Neustrelitz, an audience of older left-wing voters are at an event discussing, among other things, why Germany was left in the lurch. On the podium is Gregor Gysi, former leader of the Left Party and, alongside Merkel, East Germany’s other great political survivor. He has a simple answer: the country was left in the lurch because of Berlin’s treatment of stricken countries in the euro crisis, when it rammed through its politics because others needed its crisis loans.

“But when Germany suddenly needed an EU [refugee] quota you could see on the others’ faces what a joy it was to send them packing,” Gysi says to nods from the audience.

Facing widespread apathy around Europe towards burden sharing, and rising mutiny at home, Merkel changed tack in March to push a refugee-swap deal with Turkey. That slowed down the flow of immigrants and cut into the human-trafficking business, but it now faces collapse after Turkey’s postcoup crackdown and a devastating description of Ankara, in a leaked German paper this week, as a “central platform for Islamist and other terrorist organisations”.

So where does all this uncertainty leave Merkel? Roland Koch says that the chancellor remains unchallenged in her party and in the country. Although many are nervous of the consequences of her refugee policy, he argues, most Germans still trust their chancellor. “It is to Merkel’s credit that she has such a large trust capital, something that won’t collapse today or tomorrow,” he says.

But others worry that another, bigger attack could see things turn very ugly, very quickly for Germany’s refugees and the chancellor.

President Joachim Gauck has warned of a divided country: a “bright” Germany of pragmatic integration volunteers and a “dark” Germany, most visible on social media, where Merkel is a “traitor of the people” and refugees are now “rapefugees”.

The refugee crisis has revived questions first raised in the 1960s, with the so-called guest workers, and still unanswered: how open or closed, uniform or diverse, does Germany want to be? And what values must you live by, which boxes must an immigrant tick, to be accepted as German by Germans?

These old battles have taken on a new urgency today: on the streets with anti-Islam Pegida marches (and counter demonstrations) and online with vicious attacks on the “lying” mainstream media, or Lügenpresse.

“The rise in refugees in 2015 opened up a channel for people to express frustrations that had been building up for some time,” says Dr Gudrun Heinrich, a political scientist at the University of Rostock. “The AfD and Pegida have made right-wing populist views socially acceptable once more.”

So far Germany’s political centre has held, and, for the first time, third-generation Germans with immigrant backgrounds are joining the battle.

Their contribution to the debate: a viral hit attacking the rising anti-refugee mood. “Diahorrea from your doner? / The refugee’s to blame. / No seat in the U-Bahn? The refugee’s to blame.” It’s a modern echo of a 1931 song, when Friedrich Holländer set new lyrics to the melody of Habanera, from the opera Carmen: “If it rains, if it hails / If it drizzles or it gushes / The Jews are to blame for everything.”

Back in the Kornhus Cafe in Neustrelitz, as Germany enters an uncertain election year, Karl Kraus says he is terrified by the notion that Germany has lost control of its sovereignty. His excited wife, Elke, likens Angela Merkel in the refugee crisis to someone cooking a soup without a recipe, throwing random ingredients into a pot.

“She’s thrown asylum seekers and refugees together with economic migrants,” she says. “But I don’t remember any discussion in Germany about whether we wanted a new wave of mass immigration. People here want to know where things are going. If Merkel knows, she’s not telling us.”