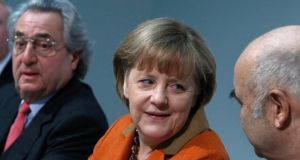 
German chancellor Angela Merkel has criticised excessive managerial pay, triggering speculation she is pursuing a second grand coalition with the centre-left Social Democrats (SPD) at September’s general election, or at least their voters.

The German leader of the centre-right Christian Democrats (CDU) is usually cautious about politicians intervening in business. She has spoken out against a statutory minimum wage and quotas for women in the workplace.

Yesterday, however, she said she understood people “shaking their heads at some pay packages which are completely out of proportion”.

“Excess cannot be [tolerated] in a free and socially-responsible society,” she told the Freie Presse newspaper. “Sadly it has been shown that it is not enough to leave the matter to self-regulation of business alone.”

Dr Merkel said she was “in favour of the issue being tackled on a Eu ropean basis”.

The pay issue has returned to the political agenda at EU level as well as in Switzerland, where an overwhelming majority of voters supported a ban on large payouts and golden handshakes.

A decade after drastic labour and welfare changes, salaries are likely to be a key election issue. The German leader continues to reject SPD calls for a minimum wage of €8.50. This demand contradicts the German tradition of tariff autonomy, she told Freie Presse , and did not take into account regional and industrial differences.

Last year, however, the CDU dropped decades of opposition to support minimum pay rates in sectors not covered by tariff agreements.

Despite a slow recovery in her junior coalition partner, the Free Democrats (FDP), polls six months before election day put a coalition with either the SPD or the Greens as the only arithmetic options for a third Merkel term.

Meanwhile, the German cabinet has agreed higher pensions for people born with physical deformities after their mothers were given the drug Thalidomide as a sedative in the 1960s.

Under the terms of a €120 million compensation plan, likely to pass the Bundestag today, monthly payments will increase by as much as sixfold to a maximum pension of €6,900.

The additional payments are designed to fund the increasing cost of care for ailing Thalidomide survivors, now into their 50s.