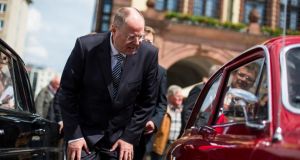 Ireland should improve its tax base and eliminate “legal tax evasion” by multinationals before it can expect further solidarity from Berlin under chancellor hopeful Peer Steinbrück.

After a luckless campaign start, the Social Democrat (SPD) challenger conceded he faces an uphill battle to unseat Angela Merkel in September’s general election. Asked by foreign journalists what he would do differently from the German leader in the euro crisis, Mr Steinbrück said he would correct austerity-heavy, market-conform political policies that have led Europe into an economic vicious circle.

Solidarity
Drill down to the detail, however, and the SPD candidate is no bleeding heart: he talks a tough line on economic stimulus, bank recapitalisations – and Ireland. “Where countries receive the solidarity of others, that they are called upon to improve their own income base,” said Mr Steinbrück to foreign journalists yesterday in Berlin.

“It cannot be that we have legal tax evasion and rules systematically exploited by large transnational companies to avoid their fiscal responsibility.”

A year after EU leaders agreed in principle to allow bank recapitalisations from the ESM bailout fund, Mr Steinbrück said Berlin was operating a go-slow in agreeing the political preconditions to allow this, such as new European banking rules.

No progress was likely this year, he said: the Merkel administration will “do everything to prevent triggering bank recapitalisations as it would be not so popular here”.

Mr Steinbrück indicated he was not a fan of such a move either, saying the ESM fund “was there to recapitalise sovereign states, not banks”.

Asked why the SPD was far less vocal on the euro bonds today, Mr Steinbrück said: “It may be necessary that we will need these instruments but others have to make sure they won’t go mad with them.”

As Germany’s highest court deliberates on the role of the ECB in the crisis, Mr Steinbrück praised the Frankfurt bank for taking on a “stabilising role” in a European political vacuum.

Win back voters
On the political front, Mr Steinbrück said he would fight a concentrated 10-week election campaign to win back the eight million stay-at-home SPD voters who had abandoned the party in the last decade. The question is: how?

SPD campaign strategists believe voters will respond to a left-wing campaign criticising a sacrifice of social justice principles in the euro crisis. But Mr Steinbrück and his party are well behind in polls and struggling to score any political points with voters who are simultaneously fatigued and, on a day-to-day level, largely untouched by the euro zone crisis.