Call intercepted by NSA and circulated by Wikileaks to media 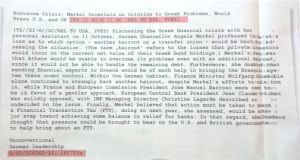 The note on the Merkel phone call in 2011

German chancellor Angela Merkel admitted in a 2011 phone call that Greek debt would be unsustainable even after a second debt write-down, according to a phone call intercepted by the NSA.

A transcript of the call from October 9th 2011 suggested the German leader was “at a loss” as to whether another haircut (a debt write-down) - or a transfer union (between EU member states) would be best for addressing the Greek crisis.

According to the summary, part of a cache of NSA documents handed by Wikileaks to the German press, finance minister Wolfgang Schäuble was reportedly supportive of another haircut, “despite Merkel’s efforts to rein him in”.

The conversation, during the height of the euro crisis, suggests little has changed in the German leader’s thinking on Greece. In the current standoff with Athens, Dr Merkel has refused to entertain haircuts in public until promised reforms are implemented. Behind the scenes in Berlin, however, debt relief for Greece in the form of loan extensions is seen as an option.

“Merkel’s fear was that Athens would be unable to overcome its problems even with an additional haircut, since it would not be able to handle the remaining debt,” said a summary of the phone call, forwarded by the US to its “Five-Eyes” intelligence co-operation partners: the UK, Canada, Australia and New Zealand.

No direct quotes are used to back up the assessments made in the phone call summary, believed to have taken place between Dr Merkel and an assistant during a trip to Vietnam in 2011.

In the conversation, the chancellor reportedly expressed the wish to finance the cost of the eurocrisis through a financial transaction tax (FTT) in the coming year.

“In that regard the Germans thought that pressure could be brought to bear on the US and British governments to help bring about an FTT,” the summary concludes.

After it emerged in 2013 that the NSA had tapped Angela Merkel’s mobile phone, the German leader said that “spying on friends is just no on”.

A subsequent investigation into the affair was dropped by German authorities, blaming a lack of co-operation by the US authorities.

Last month came similar revelations of widespread NSA spying on the communications of the French government, including three presidents.

The latest Wikileaks revelations in Germany show that, as well as eavesdropping on Dr Merkel’s phone, the NSA tapped the phone lines in the federal ministry of finance, back at least to the era of finance minister Oskar Lafontaine, who resigned in 1999.

When the Süddeutsche Zeitung dialed a phone number labelled “GE INT FINANCE MIN LAFONT” in the documents, they were linked to the personal office in Berlin of Wolfgang Schäuble.

Other documents suggest widespread tapping of phone lines in the economics and agriculture ministries as well as a Frankfurt number linked to the ECB’s member state oversight office.