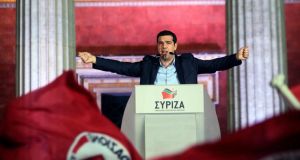 The left-wing, anti-austerity party Syriza has won the Greek general election and has allied with a right wing party against Greece’s bailout and austerity measures.

Below is a brief outline of how some newspapers from around the world covered and analysed the landmark vote.

Syriza’s victory is a milestone for Europe. Continuing economic weakness has stirred a populist backlash from France to Spain to Italy, with more voters growing fed up with policies that require sacrifice to meet the demands of creditors but that have not delivered more jobs and prosperity.

Who will blink now Syriza has won?

The most we can say is that if Greece’s creditors blink, the significant demonstration effect to the rest of the eurozone will give rise to economic relief in the south and angst in the north, hardly furthering the cause of political unity. If Greece does, leaving its economic renewal programme toothless, the eurozone’s narrative of mistrust between north and south will intensify with dangerous political consequences.

Syriza has won an important victory, but a new chapter of European instability is only just starting.

With millions of voters turning out — from graffiti-scarred lanes in the Parthenon’s shadow to islands lapped by aqua-green waves — the country delivered a historic win to Syriza, a radical leftist party that could put Greece on a collision course with the rest of Europe. The expected showdown has already rattled Greek financial markets and may challenge the core principle behind Europe’s currency union.

The damning popular verdict on Europe’s response to financial meltdown is a haunting outcome for the EU’s political elite. For the first time, power has been handed to populist outsiders deeply opposed to Brussels and Berlin, albeit not anti-European, unlike their counterparts on the far right across the EU. For the first time a child of the European crisis, an explicitly anti-austerity party, will take office in the EU.

Now that the election is won, the storytelling of the campaign is over and Alexis Tsipras comes into Greek government in reality. No matter who he forms a coalition with in the end, one thing is already clear: Tsipras needs money fast.

(Opinion) The resounding victory of Syriza is a cry of hope of the Greeks. But it is also a cry for freedom from dispossession and European blackmail.

Huge gamble but both sides have a strong hand

An outright Syriza victory is a defining moment, not only for Greece but also for the whole eurozone.

Six years of recession, 25 per cent unemployment, 50 per cent youth unemployment, falling wages and endlessly declining living standards were too much to bear for the people of Greece.

Effectively, they have said: “Enough, the alternative can’t be worse than this.” In doing so, they have posed existential questions about the entire euro project itself.

For the left-leaning Podemos, which sees Syriza as a sister party, the Greek results seem to support its own belief that Spaniards will vote the same way in general elections scheduled for later this year.

For five years, Europe’s common-currency bloc has squabbled over whether the solution to its economic crisis lies in slimming the state and deregulating markets, or in more expansionary fiscal and monetary policies. The battle lines just got messier, the way out even less clear.