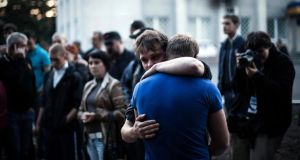 Two men react after Ukrainian national guardsmen opened fire on a crowd outside a town hall in Krasnoarmeisk, about 30 km from the regional capital Donetsk during polling on Sunday. Photograph: AP Photo/Manu Brabo

Pale sunlight leaks through the net curtains, washing over Grigory Klyobka’s steel-grey hair and the cigarette smoke that wreathes his tired face.

“No one knows who the hell all these people are,” says the chief police investigator of Krasnoarmeysk, a mining town in eastern Ukraine.

“They say they are from some militia, or a special unit, or the national guard. We try to find out who is who but no one tells us anything. It seems that, compared to what’s happening around the region, our problems mean nothing.”

The windows of his police station are covered with sandbags, and the door is reinforced with steel chains and heavy padlocks. His officers’ guns have been taken to a safer place, and armed men burst in and stole their bulletproof vests last week.

Outside the nearby town hall, people are laying flowers and candles for two locals shot dead there on Sunday, by an apparently different group of gunmen who introduced themselves as a special unit of government forces called “Dnepr”.

“People gathered around, asking why they had come and telling them to go away. The gunmen fired warning shots in the air and then left for the town hall, which they said they had come to protect from separatists who planned to seize it.”

The gunmen arrived at the square as people were voting in a referendum organised by pro-Russian rebels, on whether the Donetsk region should leave Ukraine.

Separatists have occupied administration and police buildings across Donetsk and in the nearby city of Luhansk, as part of an insurgency that Ukraine and its allies believe is orchestrated by Russia.

“Again they said they were ‘Dnepr’, and again people massed around them, shouting and complaining. Some people were the worse for wear from drink, you know how it is,” says Sizon, his shoulders shrugging inside his grey leather jacket.

“Then there were gunshots. Did they shoot at people? Did warning shots ricochet and hit people? We don’t know, we’re waiting for a ballistics report. But one man was dead when he reached hospital and another died later. Another guy’s leg was smashed by a bullet and he’s having it amputated tomorrow.”

Several people filmed these moments on their phones and, though the pictures are shaky, the fear and fury of the crowd are palpable.

Random violence
Soon afterwards the gunmen jumped into vans and drove away, leaving another town in eastern Ukraine in mourning, shocked at an act of sudden, random violence, and a little further from the reach of an increasingly desperate Kiev.

Footage from Krasnoarmeysk raced around the internet, and confirmed the fears of many Russians and residents of mostly Russian-speaking eastern Ukraine, that Kiev has been taken over by fascists who will kill those who oppose them.

It is a grim but simple narrative, and nothing is so straightforward in today’s Ukraine.

Officials swiftly denied that special police unit “Dnepr” had left its home region of Dnepropetrovsk, which borders Donetsk to the west and is firmly under the control of pro-Kiev governor and billionaire oligarch Ihor Kolomoisky.

His deputy, Boris Filatov, claimed the deadly shooting was set up to discredit Ukraine’s forces, and that the “rabble” that entered Krasnoarmeysk wearing a motley assortment of fatigues, jeans, boots and trainers could not be special forces.

And yet, at a checkpoint on the main road between Donetsk and Krasnoarmeysk yesterday, masked men in assorted clothing and carrying a variety of guns stopped and searched cars, telling drivers they were members of “Dnepr”. On each side of the road, between fields blazing with golden flowers, sat a green armoured personnel carrier flying the blue-and-yellow Ukrainian flag.

Between desultory drags on his cigarette, investigator Klyobka describes how overnight an apparent misunderstanding between people at the checkpoint led to a gunman opening fire on a bus of mineworkers, lightly injuring one.

“Police officers went to the roadblock to investigate, but the gunmen wouldn’t let them work. They won’t tell us their names or what they are doing. On the other side of town is a proper army checkpoint, and we work well with them, no problem at all. But with those guys – none of us know what is going on.”

Klyobka has seen plenty during 28 years of police service, and Sizon is no novice with 20 years of experience. But both are utterly bemused by recent events.

“On May 8th, a group of gunmen came to the police station and took our bulletproof vests,” recounts Sizon.

“News reports said they came with fake guns and we just handed over our stuff. The media made us look like fools.”

“I spent 2½ years in special forces,” adds Klyobka. “The way those men took up positions and handled their weapons – which I assure you were very real – showed me they were professionals. God knows who, but professionals.”

Moscow-fuelled chaos
Kiev says Russian agents and military veterans are operating in eastern Ukraine, in league with local criminals and allies of Donetsk-born ex-president Viktor Yanukovich, to sow bloody chaos in the region and give the Kremlin a pretext to send in troops.

The police have often stood aside or assisted anti-government activists when trouble has flared across the south and east, prompting many Ukrainians to call them traitors.

“Maybe officials don’t tell us what’s happening because they think they can’t trust us,” mutters Klyobka.

“But we are doing our best for our town. We are overwhelmed with cases and working all the hours God sends. What have I got to show for a life in the police? A small flat with a mortgage and a few scars; no dacha, no yacht, no fancy holidays.”

A few doors down from the police station, Natalya and Nina smoke cigarettes outside their second-hand shop.

“It’s total anarchy and the police are helpless. Men in masks have robbed three shops in this street alone recently,” complains Nina.

“It was peaceful here until yesterday,” adds Natalya. “Now no one knows what will happen, or who is who.”

1 Cork shootings: ‘Devastation was impossible to imagine’, funeral hears
2 Storm Aiden prompts nationwide weather alerts for Halloween
3 Strong earthquake with a magnitude of up to 7 hits Turkey and Greece
4 US election: ‘Trump would not be caught dead here unless he wanted our votes’
5 The real Contagion virus is out there and it’s causing virologists to worry
Real news has value SUBSCRIBE