Man killed by tiger which escaped from Georgia zoo 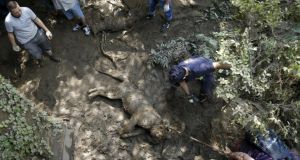 Police in Georgia say a tiger that broke loose after severe flooding at a zoo has killed one man and wounded another.

Dozens of animals fled the zoo as a torrent of water tore through the city of Tbilisi from the normally tranquil Vere river, which burst its banks after heavy rain on Sunday.

The Tbilisi zoo had previously said all lions and tigers missing after the flooding had been found dead and only one jaguar remained unaccounted for.

The Interior Ministry says police killed the tiger, which was hiding at an abandoned factory turned into a construction market when he attacked the men on Wednesday.

Zoo officials had said on Tuesday that eight lions, all seven of the zoo’s tigers and at least two of its three jaguars were killed in the flooding in Georgia’s capital caused by heavy rains over the weekend.