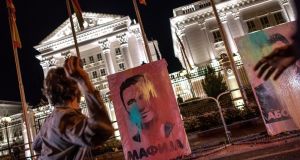 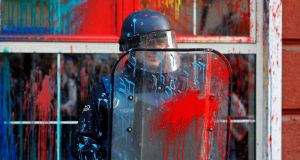 A police officer holds his shield as protestors pelt the facade of the Ministry of Justice with paint. Photograph: Boris Grdanoski/AP Photo 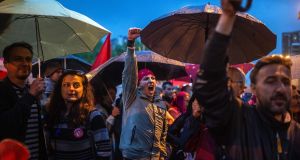 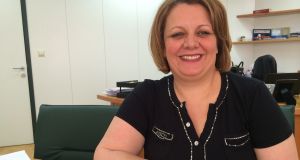 Macedonia’s special prosecutor Katica Janeva in her office in Skopje. She has vowed that her office will continue investigating a vast spying and corruption scandal, despite a sweeping presidential pardon for suspects. Photograph: Daniel McLaughlin

Almost every evening, thousands of Macedonians march through the capital Skopje to demand an overhaul of the country’s political system and an end to impunity for its scandal-ridden elite.

The rallies culminate in a government ministry or other state office being splattered with paint-filled balloons, a vivid act of defiance that has become the calling card for what protesters call their “colourful revolution”.

Each march begins the same way, too, with people gathering outside an unremarkable building in central Skopje to show support for the legal team inside that is doing unprecedented work under mounting pressure.

The special prosecutor’s office was a created last year as part of a Western-brokered deal to defuse a crisis that paralysed Macedonia’s political system in the wake of a breath-taking spying and corruption scandal.

Starting last May, opposition leader Zoran Zaev released what he called his “bombs” – revelations from secretly recorded conversations that seemed to implicate top politicians, security officials, judges and other influential figures in major crime, from election fraud to the cover-up of a police murder.

As well as the criminal activity discussed in the recordings, there was the matter of the wiretaps themselves, which Zaev said came from an illegal government eavesdropping operation that monitored the communications of more than 20,000 people in a country of just two million.

The “bombs” depicted the then government of prime minister Nikola Gruevski as a criminal regime, intent on boosting its power and wealth by corrupting Macedonia’s politics, business, judiciary, media and security services.

Gruevski and his allies denied all the claims, and said Zaev’s revelations were edited versions of wiretaps that he had acquired with the help of an unnamed foreign intelligence agency with the aim of staging a coup in Macedonia; Zaev insisted he had received the recordings from “patriots” in the security services who wanted to expose wrongdoing.

The scandal pitched Macedonia into political turmoil, and tens of thousands of people joined rival rallies in Skopje for and against Gruevski, who had committed his country to European Union integration during almost a decade in office.

Fearing violence and a long impasse in Macedonia, Western ambassadors and EU officials brokered a deal for Gruevski to step down and elections to be held once media reforms and updated electoral rolls were in place; the agreement also created the independent special prosecutor’s office to investigate the wiretap scandal.

That early election was already in doubt, having been postponed for six weeks to June and with Zaev vowing to boycott it due to the absence of vital reforms, when Macedonian president Gjorge Ivanov dropped a bombshell of his own this month.

In a televised address to the nation, Ivanov declared a blanket legal pardon for 57 people, including Gruevski, several of his former ministers, security service figures, mayors, judges, businessmen and other politicians including Zaev.

“I decided to use my constitutional right to help overcome the political crisis,” Ivanov announced, saying he was determined “to put an end to this agony”.

Echoing Gruevski’s claim of a foreign conspiracy, Ivanov called the wiretap scandal “someone else’s game . . . in someone else’s interests”.

“We have had enough of seeing Macedonians going against Macedonians,” he said, while looking ahead to “fair and democratic elections” that would turn the page on “two dark years that history will consider as a black mark on our generation”.

At a stroke, the president seemed to have quashed the wiretap investigations.

“It was unbelievable. The whole office had to go home that afternoon to calm down,” Katica Janeva, the special prosecutor, said of Ivanov’s April 12th announcement.

“We always knew that certain people would not like our work, and would do anything they could to discredit and undermine us. What the president did made us lose more trust in our institutions. But we knew we wouldn’t stop our work.”

Zaev called Ivanov’s amnesty “a coup” by “the man put in place by Nikola Gruevski”, while the EU and US urged the president to reverse a decision that they said cast doubt on Macedonia’s democracy and rule of law.

Gruevski and his allies were the main beneficiaries of the pardon, but his party also expressed “deep disagreement” with Ivanov’s decision.

In Janeva’s office of about 11 prosecutors and 24 investigators, scrutiny of Ivanov’s decree only deepened a sense of bafflement.

“Three of our prosecutors are on the list, but have no idea why. Have all these people been pardoned for anything they may be charged with in future? It’s like a licence to kill!” Janeva said, laughing at the absurdity of the situation.

If Ivanov sought to neutralise the special prosecutor’s office, he achieved the opposite.

When Janeva held a press conference to declare her team’s determination to keep working, EU envoys attended in a display of support; and by making her office the starting point of their rallies of the last fortnight, protesters have made it a symbol of their demand for justice and reform.

“Every day, people come up to me in the street to express support,” said Janeva (51), who was previously chief prosecutor in the southern town of Gevgelija. She said her team, which is young and includes many women, hope to “help restore democratic standards in our country and public trust in the judiciary”.

The office is not universally popular however, and at pro-Gruevski rallies that have also drawn thousands of people, Janeva and colleagues are denounced as puppets of the west who are working in cahoots with Zaev.

“Only through our work will we convince the public that no foreign country or political party is controlling us,” Janeva said. “We are independent of all other prosecutors’ offices and the police. We decide which cases to open and we investigate. No one can interfere with our work.”

Janeva said she does not fear for her safety, despite the sensitivity of her work and the death from a gunshot wound this week of a witness in one of her cases; it is not yet clear whether businessman Kosta Krpac was murdered or killed himself.

Investigations opened so far are based on information made public in Zaev’s “bombs”; Janeva’s team has not even begun to examine the vast number of wiretapped conversations on hard drives that he gave her on December 30th, which could generate cases for years to come.

“We will work with integrity for as long as this office exists,” said Janeva. “And if the president decides to pardon everyone involved in each investigation that we open, then he will have a lot of work to do.”