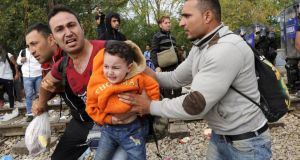 A migrant reacts as he carries a child during clashes with Macedonian police at the Greek-Macedonian border. Photograph: Alexandros Avramidis/Reuters 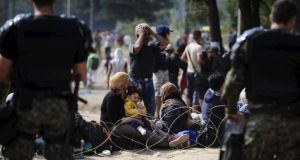 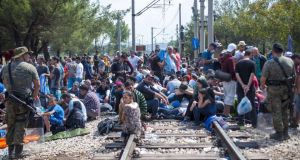 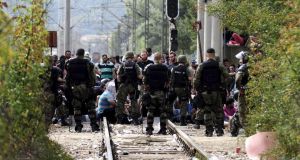 Macedonian police drove back crowds of migrants and refugees trying to enter from Greece on Friday after a night spent stranded in no-man’s land by an emergency decree effectively sealing the Macedonian frontier.

Tear gas was fired and at least migrants were taken for treatment on the Greek side of the border.

Macedonia declared a state of emergency on its southern and northern borders, saying it would involve the army in confronting a growing crisis, the MIA state news agency reported.

“We expect the involvement of the army will bring two desired effects - it will increase security among our citizens in the two regions and will allow for a more comprehensive approach toward people expressing their interest in applying for asylum,” Interior Ministry spokesman Ivo Kotevski was quoted as saying.

Médecins Sans Frontières has doctors in the Greek border village of Idomeni and said it received 10 people injured by stun grenades on Friday. Six people with minor injuries were treated on the spot, while 4 were taken to hospital.

A statement issued today by the organisation said it treated 100 people on Thursday. It estimates that some 3,000 people have gathered at the Macedonian border.

Several thousand people from the Middle East, Africa and Asia, many of them Syrian refugees, spent a cold night in no-man’s land after Macedonia on Thursday declared a state of emergency and effectively blocked its southern frontier to migrants and refugees.

The flow into Macedonia had reached 1,500-2,000 per day in recent weeks, up from some 200 daily in May, leading to desperate scenes of crowds wrestling to board packed trains at a nearby railway station, children squeezed through open carriage windows.

Reporters on the border said tensions quickly subsided, but a crowd of at least 1,000 was sitting in no-man’s land at the entrance to Macedonia, their path blocked by riot police with armoured vehicles.

Some were on the railway line, and one morning train heading south from Macedonia was stopped at the Gevgelija border station, the passengers told to disembark and take buses into Greece.

Some migrants and refugees managed to cross during the night, telling journalists that others were caught by police and driven back into no-man’s land.

“I ran fast and escaped,” said Mohammed Khalid, an 18-year-old Syrian from the devastated city of Aleppo. “They got my brother and most of the others and sent them back to Greece.”

The crowds stranded in no-man’s land may increase through the day as more arrive from Greece, including 2,400 Syrian refugees taken by boat from the island of Kos to the mainland on Thursday.

The United Nations refugee agency is on the ground, and has urged the government to allocate more space to provide shelter for migrants and refugees on its side of the border. The Red Cross is also present.

Some 50,000 arrived on Greek shores from Turkey in July alone, seeking to reach western Europe through Macedonia, Serbia and Hungary, where Europe’s borderless Schengen zone begins.

Macedonia says it cannot deal with the influx. The situation is not aided by a tense relationship between Macedonia and Greece, rooted in a dispute over Macedonia’s name since it declared independence from socialist Yugoslavia in 1991.

Macedonia has confronted refugee crises before, most notably in 1999 during the war in Serbia’s then southern province of Kosovo when hundreds of thousands of ethnic Albanians took shelter in refugee camps on Macedonia’s northern border.